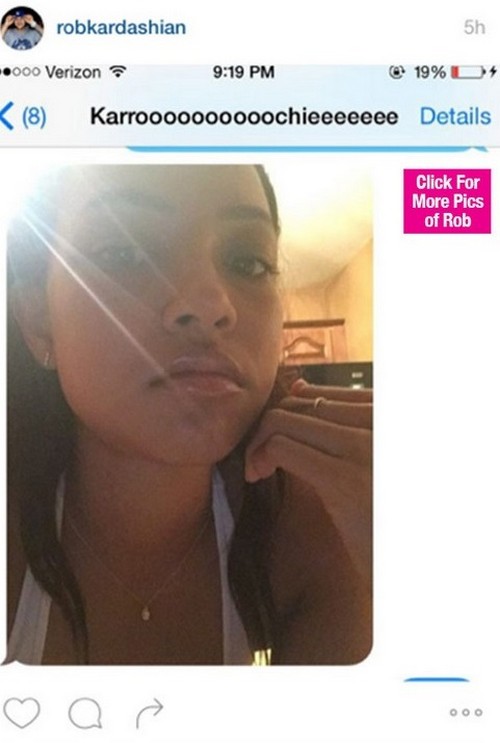 Rob Kardashian and Karrueche Tran dating rumors arose up on Tuesday September 22 when the Keeping Up With The Kardashians star shared a text message he received of Karrueche – it was a selfie she had snapped and sent to him. Rob captioned the Instagram post, “I love when she send me pictures,” followed by a string of heart emojis. Of course, the Internet went wild. Did Rob Kardashian seriously just lose 50 pounds AND steal Chris Brown’s ex-girlfriend, all in one month?!

Everyone was buzzing about Rob Kardashian and Karrueche Tran’s relationship, and speculating over how her crazy ex Chris Brown would respond. Then, Rob took to Instagram and edited the caption on the photo. Rob stated, “Yall dumb af. I been Friends with Karoooooch since high school. F–k outta here with your negative s—t.” Insiders say that apparently, after the Internet went crazy, Karrueche pressured Rob to clear up the confusion, and the last thing she wanted was for everyone to think they were dating. And, that explains the angry caption editing on Rob’s part.

We can’t help but feel a little sad for Rob though. He was finally getting his confidence and his mojo back, and he has been working hard to lose weight and get back in shape – Rob is even rumored to be gearing up for a big return to the family reality TV show. He obviously thought there was something more going on between himself and Karrueche, after all he used heart emojis – so you know its real. Then Karrueche freaked out when she was publicly linked to him in a romantic sense, and told him to fix it ASAP. That has got to sting!

What do you guys think? Is there any chance that Rob Kardashian and Karrueche Tran could wind up dating some day? Could this minor setback cause Rob to relapse on his diet and workout regimen? Let us know what you think in the comments below.