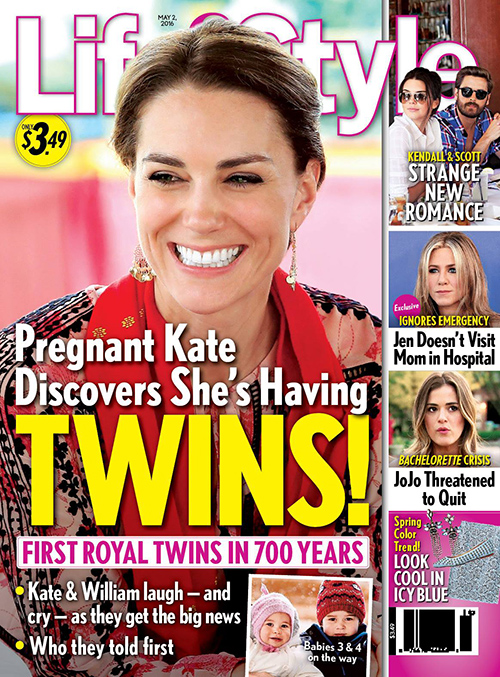 Kate Middleton baby news! According to a new report, Kate is pregnant with twins, the first time that’s happened to a British Royal in 700 years. The most recent cover of Life & Style Weekly proclaims that Kate and William were completely shocked to find out there’s not only one but two Royal babies on the way.

Kate is not pregnant and she’s certainly not pregnant with twins. Every few months, another royal insider steps forward to tell the world that Kate and William were shocked to find out she is expecting again.

Whenever these Royal baby reports come out, the insider explains that the Palace is keeping quiet until Kate Middleton is 12 to 14 weeks before making an official announcement of any sort.

As if anyone needs a case for further doubt about a Royal pregnancy all they need to do is look back at Kate Middleton’s wardrobe from the Royal trip. Kate wore skintight jeans and figure-hugging dresses throughout the Cambridge’s seven day trip abroad. Wouldn’t an end-of-the-first trimester twin baby bump been quite evident?

The last thing Kate and William need right now is an accidental pregnancy. Not only do the Duchess and Duke of Cambridge have two toddlers keeping them busy enough, the Cambridge marriage isn’t exactly stable.

William is probably still paying for the not-so-secret trip to Kenya to attend ex-girlfriend Jecca Craig’s wedding over Easter weekend.

There’s constant speculation that Prince William is cheating on Kate Middleton with Jecca and/or still pining away like a schoolboy with his first crush over Isabella Calthorpe.

Can anyone honestly imagine Kate having another Royal baby? An heir and a spare are required and Kate has done her job in that regard. Now all the Duchess of Cambridge need do is slap a smile on and look adoringly at Prince William when the couple has joint Royal responsibilities.