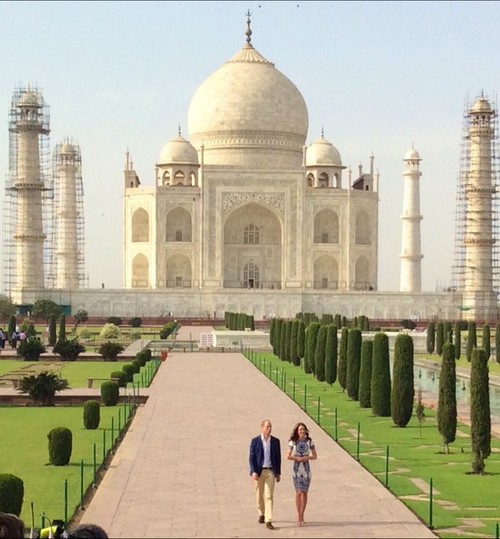 Kate Middleton has been photographed sitting on the bench at the Taj Mahal with Prince William. The Duchess of Cambridge has done her duty and is now probably holding her breath hoping to avoid a divorce like the one that soon followed Princess Diana’s visit.

The wait is over. Kate Middleton and Prince William came, saw and sat on THE famous Diana bench. After all the excitement and hype, it was pretty boring. After the photo was taken, the Cambridge’s unceremoniously stood up and walked away for a two-hour tour of the Taj Mahal with India’s chief archaeologist.

There’s a quick video – just under one minute – of William and Kate walking up to the bench. Kate wore a knee-length white dress with blue Indian-inspired print. William wore casual beige-colored pants, a white dress shirt with no tie and a dark blue blazer.

As the couple approached the Princess Diana seat for the photo op there was no hand-holding, no sign at all of any affection. Maybe Kate and William are sick of each other after seven days spent together 24/7.

Kate’s legs and knees are bent toward William, hands folded in her lap, Princess Diana’s iconic blue sapphire engagement ring front and center so as not to be missed. William and Kate’s shoulders and knees are touch, that’s it. We really did expect more after all the pomp and circumstance surrounding the event 24-years in the making.

Kate and William look like two uncomfortable tourists, not the future King and Queen creating their very own history-making moment at the Taj Mahal, the greatest tribute to love in the world. Hardly reflected by Kate Middleton’s strained relationship with Prince William following the recent Jecca Craig scandal!

Prince William and Kate Middleton looked happier and more in love upon arrival at the midway point of the hike up to the Taktsang Palphug Monastery in the Himalayas on Friday, April 15.

The look on the Cambridge’s face as they posed seems to say, “Oh well, here we are, smile pretty, take the photo, get me out of here.” That’s the body language we see. According to reports it is 106°F in India today and the Duke and Duchess of Cambridge were probably melting.

The photo will be analyzed for signs of strain in the Cambridge’s marriage. So far, only hours after seating their Royal bottoms upon the Princess Diana seat, there’s nothing but praise for William and Kate. Come back to CDL to keep up with the Royal Family news and gossip!