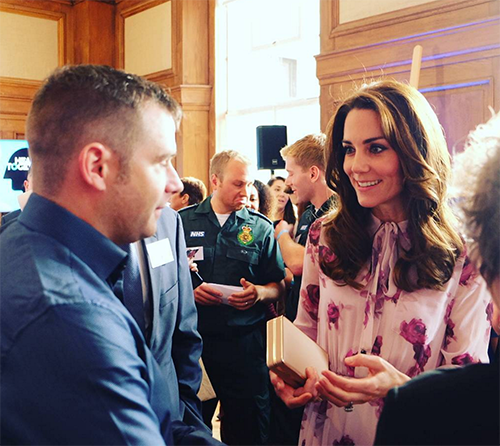 Prince William might have gained some popularity since his and Kate Middleton’s Royal Canadian Trip. The Duke of Cambridge was gleefully greeted by patients and graduates during the his visit to Basingstoke Hospital. Kate Middleton, on the other hand, received somewhat of a frosty greeting while in the Netherlands. She was there to take part in a panel discussion at The Hague with mental health professionals and other experts on addiction.

The previous day, Kate Middleton participated, along with Prince William and Prince Harry, in events to honor World Mental Health Day. Attendees at that event seemed more interested in meeting William and Harry than they were in rubbing elbows with Kate.

Kate’s deepest desire is to be as beloved as Princess Diana, but the future Queen is failing miserably. No matter what Kate does, it’s never enough to please anyone – not Queen Elizabeth, not Prince Charles, not the public, and certainly not Camilla Parker-Bowles.

The only way Kate can find her way back into the good graces of the world and gain back the immense popularity she once enjoyed would be an announcement that the Cambridge’s are expecting another Royal baby.

It seems the only time Kate is afforded any real adulation is when she’s pregnant or has just given birth. Then everyone loves Kate Middleton – expect for Camilla Parker-Bowles. The Duchess of Cornwall and the Duchess of Cambridge will never get along, that’s a given.

At least Kate and Camilla have one thing in common – neither will ever eclipse Princess Diana in popularity. These two Royal wives have neither the compassion nor that special brand of magic Diana’s brother Charles Spencer talked about in his eulogy.

It does appear that Prince William has finally wised up and realized he needed to take a page from Princess Diana’s book: express true empathy and warmth when interacting with his British subjects.

The public seems to be responding to this new and improved Duke of Cambridge. One can only hope that William has finally grown into his Royal role and will keep following in Diana’s impossible-to-fill shoes.

The Duchess of Cambridge hears about the support available for those who find themselves providing mental health first aid for someone in their lives. #WorldMentalHealthDay

Today The Duke and Duchess of Cambridge and Prince Harry are celebrating #WorldMentalHealthDay with @heads_together. This year’s theme focuses on mental health first aid and the role everyone can play in supporting friends and family.