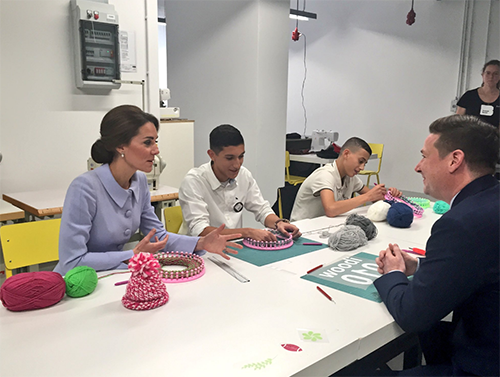 Kate Middleton has taken on her first solo trip abroad without her husband Prince William by her side, and it doesn’t look like she’s managing it as well as the monarchy had initially hoped. In fact, critics can’t help but point out that the Duchess of Cambridge looked like she was full of nerves as she tried to impress diplomats and royal fans alike on her trip to The Netherlands.

According to the Daily Mail, Kate Middleton spent the day in The Hague and Rotterdam after meeting with King Willem-Alexander and participate in a round-table discussion on addiction and mental health issues. The Duchess has long been advocating for more mental health awareness in her royal engagements back home, but this is the first time she’s done so abroad and without her husband by her side.

In fact, there have even been reports indicating that the royal family is using Kate Middleton as a ‘potent force’ to help build bridges between Britain and the remainder of the EU now that Brexit is a sure fire thing. But is it working? It’s doubtful that Kate can be seen as any kind of force other than a fashion one as she’s done little as far as her royal contributions over the course of the last five years. There aren’t even any sound bites available from Kate during her trips as apparently Queen Elizabeth is afraid of her creating another gaffe by what she might or might not say.

By the clenched look on her face and her slouched appearance, it’s more than apparent that Kate Middleton feels both uncomfortable and awkward in the Netherlands alone. In fact, the only moments in which Kate feels completely at ease is when she has both Prince William and Prince Harry next to her, that way she’s at least assured that she doesn’t have to do or say much with both of them around.

Of course, this isn’t the first time Kate Middleton has been expected to do her royal ‘work’ on her own. Back in 2014, she was scheduled to visit the island nation of Malta but canceled because she was suffering from acute morning sickness while she was still pregnant with Princess Charlotte. But now that she can’t use her pregnancy as an excuse, the Duchess has no choice but to follow through with her engagements, whether she likes it or not. Sure, she would rather sit home in the comforts of Anmer Hall, but knowing just how infuriated Queen Elizabeth already is with her grandson and his wife, the last thing Kate wants to do is anger her even more. Do you agree, CDL readers?

Also, don’t forget to come back to CDL for all your Royal news and updates!

Meganoid the robot shows The Duchess his best moves! pic.twitter.com/03K0bx0gSJ

The Duchess has arrived @BouwKeet_RTD where she is getting a brief on why this creative workshop is so important to the local area. pic.twitter.com/qY11qnYfIt