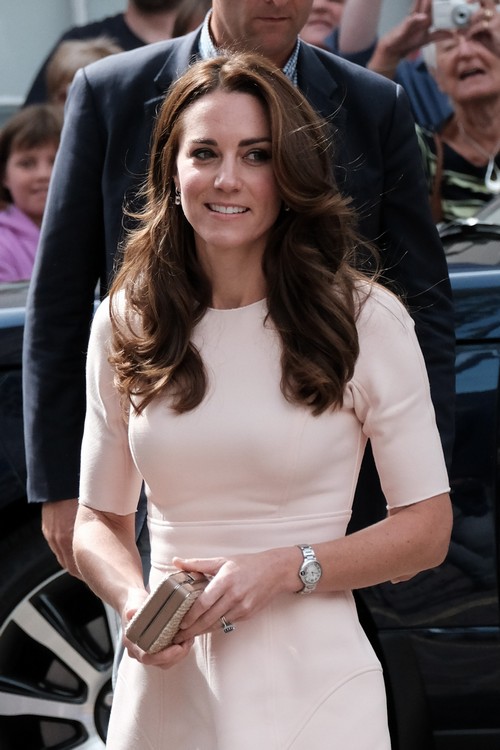 Kate Middleton appeared a bit more busty than usual during the Cambridge’s visit to Cornwall and the Isles of Scilly last week. At first there was speculation that Kate Middleton is pregnant with Royal baby #3. But there’s now buzz on the Internet and various reports that Kate’s not pregnant but had a secret breast augmentation during the Cambridge’s summer holiday in France.

Kate donned a figure-hugging pink dress during her visit to the Duchy of Cornwall with Prince William on Thursday, September 1. Kate received quite a few cat-calls from local construction workers who noticed Kate’s ample assets. It could just have been the fit of the dress and a really good push-up bra that showed off Kate’s bosom.

During a tour of the Eden Project and the Isles of Scilly Kate wore a tight-fitted cream colored blouse that once again accented her bust line. It was undeniable at that point, something happened because, at best, Kate’s has an average cup size.

Is it that we didn’t notice Kate’s bust line before because the world is always so focused on her stomach wondering if the Duchess of Cambridge is pregnant? Maybe Kate gained a little bit of weight while enjoying some time off from her never-ending Royal engagements? Adding a few pounds to her stick thin frame could account for the increase in Kate’s breast size.

Thank you #Cornwall and the #IslesofScilly for such a warm welcome over the last two days. Hope to be back again soon! 📸 PA

Did Kate Middleton sneak in a breast augmentation while in the South of France with Prince William? It is a reasonable guestimate that the future Queen needed a breast lift after giving birth to two children. Why not go up a cup size or two while under the knife getting your droopy chest nipped and tucked?

It’s obvious that over the years that Kate is no stranger to Botox, fillers and surgical procedures in a desperate attempt to stay youthful looking. Whenever keen Royal watchers publicly comment that Kate Middleton is looking a little tired around the eyes the wrinkles and crows’ feet seem to magically disappear.

If Kate Middleton did slip in a secret breast augmentation during her summer holiday in France we say more power to her. Now it’s Prince William’s turn – goodness knows the future King needs to do something about his looks.

One nice person may have said Prince William looks just like his mother Princess Diana, but we think differently, don’t we? At 34-years-old Prince William really shouldn’t look as old as his 52-year-old uncle Prince Edward.

Did Kate have a breast augmentation? Or was it just the fit of the clothes and a very good push-up bra that made it appear that Kate’s assets are more ample than we’ve noticed in the past? Come back to CDL to get all the Royals news!

The sun came out in the end! What a wonderful visit to the beautiful Isles of Scilly. pic.twitter.com/kQIWcaRgTX