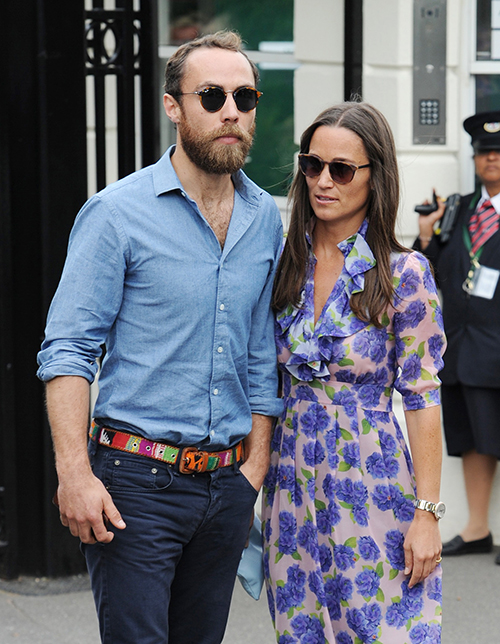 James Middleton has quietly reunited with girlfriend Donna Air and the couple may release an engagement announcement at Christmas time. Is Kate Middleton’s little brother going to beat Pippa Middleton and fiancé James Matthews down the aisle?

Donna and James briefly separated in 2016 when James moved to Hong Kong for three months. James needed to secure additional financing for Boomf, the entrepreneur’s company that makes personalized marshmallows.

Other reports stated that James and Donna called it quits because she wanted to get married and give her 13-year-old daughter a little brother or sister. James Middleton, 29, is seven years Donna Air’s junior and reportedly all the talk of marriage, babies, and being a stepdad to a teenager gave Kate Middleton’s brother a giant case of cold feet.

In an exclusive interview with Daily Mail, James Middleton was asked if he and Donna Air are really and truly back together? Yes, the couple have reunited. “I can’t say everything that is happening with us. We are thinking about what where we are going next.”

Donna makes James very happy, and the Duchess of Cambridge’s little brother said he hopes he makes Donna happy as well. “I want children. I’ve said that before. I will have children, but you’ll have to wait,” James said in the interview.

James isn’t afraid of being a stepfather to Donna’s 13-year-old daughter Freya with multimillionaire Damian Aspinall. James revealed he adores Freya and that the teen is more mature than James “when it comes to general stuff.”

Donna is an actress who starred as Maggie Roystan in the television mini-series ‘A Dinner of Herbs.’ Donna’s also had bit parts in a couple of television series in a movie or two.

Just what Kate Middleton needs – another family member with connections to the entertainment world. Pippa Middleton’s future brother-in-law, James Matthews brother Spencer Matthews, is one of the stars of the reality television program ‘Made in Chelsea.’

Donna and James have been dating for four years – how much longer does Donna need to wait for James to put a ring on it? Once James pops the question, it’s possible Donna Air will push James Middleton to marry quickly before he changes his mind. Donna and James might make it down the aisle before Pippa Middleton and James Matthews.

While Carole Middleton is planning Pippa Middleton and James Matthews wedding of the 2017 social season, James may just keep things low key if marriage is in the cards with Donna. James revealed that he just needs someone who loves him – nothing beyond that matters.