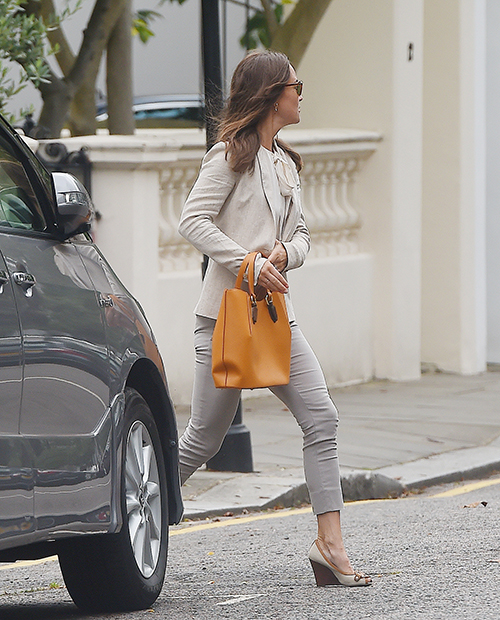 Is Pippa Middleton being boycotted by the royals? That’s what some royal observers can’t help but wonder, as there’s new speculation that Kate Middleton’s sister is being forced to change her image and fix her damaged public reputation before her James Matthews wedding.

Before Prince William and Kate Middleton’s wedding, the Middleton sisters were always known as party loving socialites who would often be photographed going in and out of nightclubs and doing whatever it takes for publicity. The Duchess of Cambridge, of course, was forced to tone down her behavior the moment she married into the British royal monarchy, but her family has still been wild and on the loose. Kate’s siblings Pippa and James Matthews still enjoy a party-loving lifestyle from London to the Caribbean with any chance they get. Pippa wants to be known as the good girl next door, but her close family and friends know that she’s anything but.

And that’s probably why Pippa is going on the record to hopefully convince the public that she’s not wildly out of control who is just as hungry for media fame and attention like her royal sister. Pippa knows that if she doesn’t, there’s a good chance that the Duke and Duchess of Cambridge won’t be attending her upcoming wedding, ruining her chances of maximizing media publicity for her big day. At the end of the day, that’s all that she wants, right?

According to the Daily Mail, Pippa said, “I have had a few years of being in the public eye and I have developed something of a thick skin,’ she says. ‘But managing it all on my own has been quite hard. I have quite a lot thrown at me, such as being followed by people hiding behind cars and jumping out with cameras. It can be unnerving. People see me as someone privileged who has used my position to advantage; that I don’t really work, that I am a socialite – that word really irritates me – and that I’m a party girl without any substance.”

Of course, Pippa knows that if it weren’t for her sister’s marriage to Prince William and the tight dress she wore on their wedding day, no one would care about her much less interview her for major newspapers and publications. Pippa Middleton should be thankful that her sister’s royal status has made her the household name that she is today, otherwise she would have never been given the opportunities to write a celebrity cookbook and the many other experiences she’s had to date.

That’s probably why Pippa Middleton has been boycotted by the royal family, as they don’t want Prince William and Kate Middleton associating with a wild party girl and London socialite. Do you agree, CDL readers?