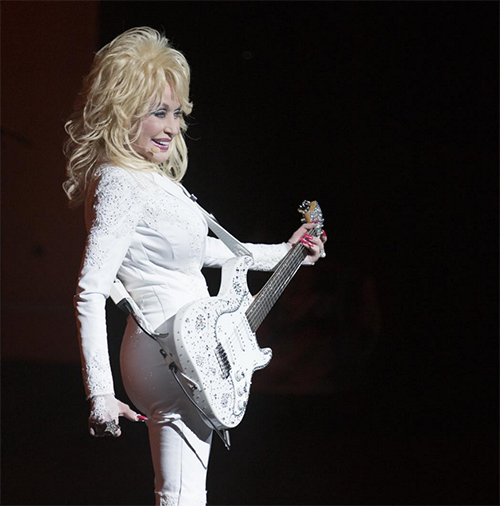 Katy Perry will sing a duet with Dolly Parton at the 2016 ACM Awards on April 3 and present Dolly with a prestigious award. Has Katy’s new friendship with Dolly reignited Taylor Swift’s feud with Katy? Dolly will be presented with the Tex Ritter Film Award at the Academy of Country Music Awards on April 3 by Katy.

The larger than life Dolly recently told Rolling Stone Country that Katy “got the big idea, why don’t we sing Jolene together because she loves the song and since it’s going to be one of the [made for television] movies.”

Dolly figured since the ladies already planned to sing Coat of Many Colors why not combine the two songs into one great duet? You have to understand, Dolly Parton doesn’t sing duets with just anybody. You pretty much have to be music royalty in order to have that honor bestowed upon you.

Taylor Swift must be hopping mad that Dolly agreed to sing a duet with Katy. Not one song but a combo of two – and they’re two of Dolly’s most iconic songs.

We don’t remember hearing anything about Dolly’s people calling Taylor’s people and asking Taylor present Dolly with any awards or sing any duets. Maybe Dolly was approached and replied, “Taylor WHO?”

Despite all Taylor’s awards, all her money and fame and her infamous Swift Squad, Katy has nabbed the coveted spot of sharing the stage with one of the original Queens of Country Music.

Sure, Taylor has some famous friends in the music business who have joined her onstage during Taylor’s “1989” tour. The current kinda-sorta Queen of Music Miranda Lambert showed up for a duet one night.

Those in the know say Miranda and Taylor can’t stand each other and it was all for publicity, not out of admiration.

But Katy is tight with Dolly Parton. Not just in a “Hey, come out and join me on stage so we can get some publicity kind of way.” It’s more like an “I admire your work let’s sing some songs together” kind of way. You know Taylor is freaking out that Katy is now BFFs with Dolly!

On Sunday, April 3, Katy Perry will take the stage at the MGM Grand in Las Vegas and present Dolly with the Tex Ritter Film Award. At some point, Katy Perry’s going to sing a duet with one of country music’s most influential women. And what will Taylor Swift be doing?

Taylor just may be sitting this one out after turning her back on country music following the 2014 awards season. Maybe Taylor will have a slew of mean girl tweets going that night. Best be careful, you don’t want to upset the legendary Dolly Parton.