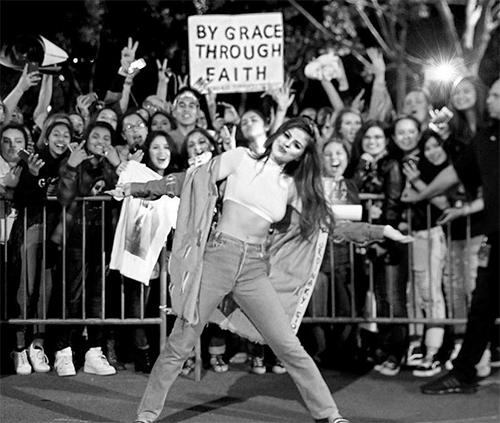 Did a couple of tweets from Katy Perry let Selena Gomez know that Orlando Bloom is off-limits? Katy’s relationship with Orlando is stronger than ever, or so it seems. Is Selena devastated?

Twitter is a wonderful thing and Katy posted a couple of cryptic messages over the past couple of days. Fans thought that Katy’s tweet on May 12 with a YouTube video of the Peggy Lee song ‘Is That All There Is’ indicated things might be over between Katy and Orlando. The song is all about breaking up after all.

Check out some of the lyrics to ‘Is That All There Is’: “Then I fell in love, head over heels in love, with the most wonderful boy in the world. We would take long walks by the river or just sit for hours gazing into each other’s eyes. We were so very much in love. Then one day he went away and I thought I’d die, but I didn’t, and when I didn’t I said to myself, ‘is that all there is to love?’”

The song gets even more depressing as the woman laments that people think she should just end it all, but the singer isn’t ready for the final disappointment. If those aren’t breakup lyrics from a heartbroken woman, what is?

After photos of Selena hanging all over Orlando popped up all over social media Katy may very have well have thought that the most wonderful boy in the world had slipped through her fingers. Was Katy awaiting the final disappointment?

On May 13, Katy posted a link to a Time magazine article about Orlando working with children in eastern Ukraine. She wrote, “Instead of giving energy & eyeballs to dumb conspiracy check out how COOL this is. #dontfeedthebeast.” Was this Katy’s way of hitting back at the speculation over the status of her relationship with Orlando?

Guess what? Selena retweeted Katy’s tweet about energy & eyeballs and conspiracies with an emoji of hands that appear to be giving a high five or clapping or something like that.

Not long after that, Selena tweeted, “#killemwithkindness –one day they’ll get it lol.” Is Selena devastated that Orlando and Katy are still going strong with the retweet and tweet?

The Orlando Bloom and Selena Gomez meet-up at a club after Selena’s Las Vegas stop on her Revival tour should be ignored! Orlando is a wonderful guy doing great things to change the world. He would never cheat on Katy with Selena or anyone else! It’s all a conspiracy to break the singer and the actor up!

Of course, Katy Perry is going to deny that Orlando Bloom is cheating with Selena Gomez! Why would the ‘Roar’ singer publicly admit her man is sneaking around with sworn enemy Taylor Swift’s bestie?