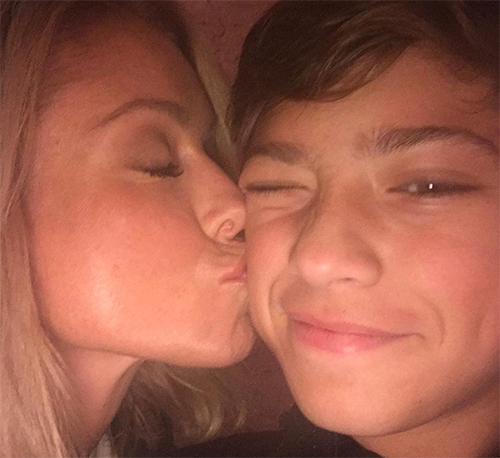 After a long search, it looks as though Kelly Ripa has finally found a replacement for her former ‘Live!’ co-host Michael Strahan, who left the show for ‘Good Morning America’ several months ago. After going through several different potential candidates, there’s a new report that says Hollywood actor Christian Slater is ready to take over the role.

In fact, according to Page Six, the actor even told Ellen DeGeneres on his talk show that he’d be willing to wake up and sit next to Kelly Ripa in front of the cameras for the next several seasons if ABC would just present him with a contract to sign already.

He said, “I love it, I live about, you know, six blocks away from there. It’s one of the greatest jobs ever, so yeah, Kelly, I’m available! Let’s do it! I’m putting my hat in the ring, why not!”

If that weren’t enough, Christian also said that he loves ‘amazing’ Kelly Ripa, which is surprising since not many in the entertainment industry have many good things to say about the petite blonde, especially after the way she treated Michael Strahan on screen. Kelly claimed that she was blindsided by Michael’s ‘Good Morning America’ transfer and became vindictive and spiteful to him for not telling her in advance.

Kelly showed her true colors and even though Christian has seen them, too, he’s apparently willing to take the job anyway. And why shouldn’t he? The 47-year-old realizes that at this point he’ll have the same popularity he did when he was a Hollywood heartthrob back in 1980s, but he’s willing to reconnect with his old fan base through a morning television talk show instead.

Seeing just how charming and funny and cooperative he is, Kelly is willing to take a chance with him. Even though he’s got the Hollywood name recognition, Kelly can still feel like she’s the bigger star of the show with him by her side. Kelly Ripa might want people to believe that she can anchor the show on her own, but inside she knows that she needs to bring a co-host on board soon before ‘Live!’s ratings take a hit.

Tell us, do you think Christian Slater would be a good replacement for Michael Strahan on ‘Live?’ Let us know what you think in our comments section. Also, don’t forget to check back with CDL for all the latest news, updates and gossip about all of your favorite celebs right here.

Thank you @makeupbymario and @ryantrygstadhair for using all of your incredible talents, magical powers and I believe the force to make me @jimmyfallon ready! On tonight!!!

Here is a picture of Conan touching my nipple. I may look confused, but it was consensual. Thanks for having me on, @teamcoco!