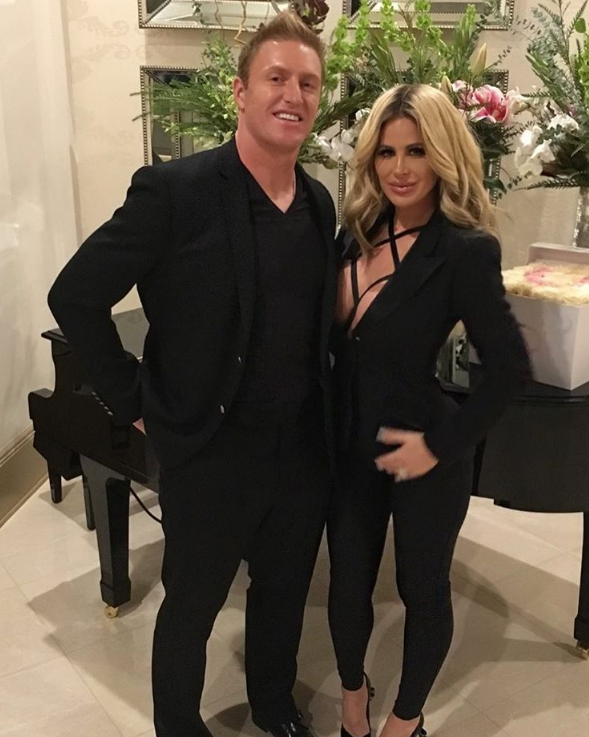 Kim Zolciak is asking Andy Cohen to help to get unemployed hubby Kroy Biermann a job withKelly Ripa on ‘Live!’ Kim and Kroy both took to Twitter and all but demanded that Andy call up Kelly Ripa and convince the ‘Live!” host to make Kroy the permanent co-host.

It started like this – E! News tweeted, “Who do you think should be Kelly’s permanent co-host?” to which Kim tweeted back, “My hubby @biermann71.” Kroy answered Kim’s tweet with, “Im ready! Let’s go! @Andy I know you can make this happen.”

Andy didn’t respond to either Kim or Kroy’s tweet, neither did Kelly. But the next day Andy did tweet this, “Co hosting with @KellyRipa this morning and my mom is doing a cooking segment! OMG.” Andy is currently promoting his new book, ‘Superficial.’

Would Andy put his friendship with Kelly on the line just to keep the couple happy? Kim and Kroy are still making money for Bravo with ‘Don’t Be Tardy’ which means the Bravo executive probably doesn’t want to burn any bridges with Kim just yet.

Since Michael Strahan vacated his seat on ‘Live!’ there have been 44 guest co-hosts to date. Reportedly Kelly is perfectly happy with the status quo and sees no reason to choose a permanent replacement It could be that Kelly doesn’t want to be eclipsed by someone else’s fame so fragile is the diva’s ego.

At one point there was talk of Mark Consuelos, Kelly’s husband of 20 years and former ‘All My Children’ co-star, being the permanent ‘Live!’ co-host. Mark was cast on the FOX drama ‘Pitch’ as Oscar Arugella, so that was a no go.

Kelly and Mark have appeared regularly on Andy’s late night talk show ‘Watch What Happens Live’ and are self-proclaimed ‘Real Housewives’ super fans. But How much influence do Kim Zolciak and Kroy Biermann think Andy Cohen has over Kelly Ripa? Or for that matter, ABC/Disney the studio behind the morning talk show.

From the tone of the Kim Zolciak and Kroy Biermann’s tweets they must think Kelly Ripa will just say yes, Andy Cohen, that sounds great! Kim must be crazy if she thinks that’s going to happen. Come back to CDL to check out all the hot news on Kelly Ripa!

Im ready! Let’s go! @Andy I know you can make this happen https://t.co/CPOM7pfbjj