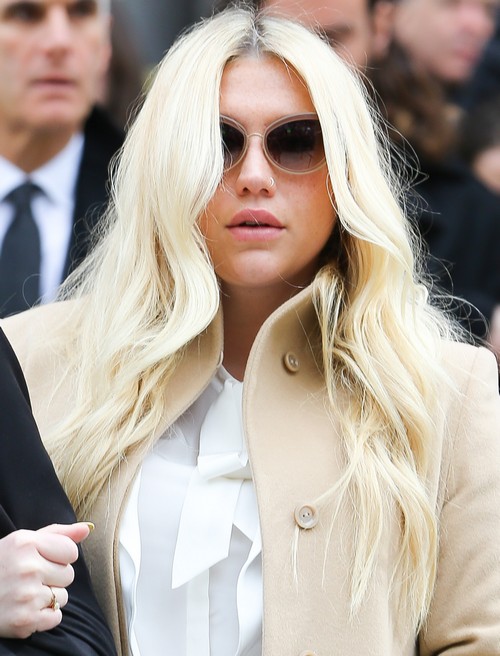 Kesha loses in court against Dr. Luke and throws tantrum as the judge denies the singer’s contract injunction. The songstress immediately burst out in tears at back of the courtroom when the judge’s decision was read.

Having been denied her heart’s desire, Kesha was inconsolable throughout the rest of the proceedings despite being comforted by her mother Rosemarie Sebert. Upon exiting the courtroom, a dejected Kesha even sought solace in the arms of dozens of fans that made their support very vocal.

The hearing on Friday, February 19 was a preliminary motion for an injunction

that would have allowed Kesha Rose Sebert to record music without Dr. Luke (given name Luke Gottwald). This is the latest development in this long running legal battle between the pop star, her producer and music giant Sony.

New York Supreme Court Justice Shirley Kornreich described as “speculative” the claims by the 28-year-old Kesha that Sony was setting her up to fail by keeping her bound to the contract. Sony’s sole purpose should be in profit making the judge states; hence, it is illogical for Kesha to hold that the company intends to cause her fall from fame.

Kesha’s lawyers strongly objected to this stance as they insist Sony is more vested in Dr. Luke, than in Kesha – hence, she wants out immediately. This was to no avail particularly as Justice Shirley Kornreich reminded the court that an injunction would only serve to undermine contract laws of New York State.

According to Rolling Stone, the long battle began in October 2014 when Kesha took Luke Gottwald to court on allegations of rampant abuse. She claims that 10 years ago she was drugged and raped by her iconic producer after a party. Of course, Dr. Luke vehemently denied these accusations.

He asserts these allegations are completely false, and were simply fabricated in an attempt to make void the contract Kesha had entered into with Sony and Dr. Luke. To that end, Billboard reports, the singer even accused Sony of supporting Dr. Luke’s abusive tendencies as with each female artist assigned they are putting them in “physical danger…”

Undaunted by Dr. Luke’s denials, Kesha submitted an affidavit detailing the events where the abuse reportedly took place shortly after her 18th birthday. Additional, Dr. Luke took credit for music and television productions he did not actually create.

The “Tik Tok” pop star insists she is too afraid to continue collaborating with her Dr. Luke. New York Daily News reports that Sony offered to assign Kesha another producer.

Luke Gottwald himself had brought suit against Rosemarie Sebert in New York and Tennessee Supreme Courts for encouraging her daughter, Kesha’s efforts to escape from her contract. A New York judge dropped the former case earlier in February 2016.

In light of this fear that appears to be driving Kesha’s actions, working with another Sony producer should be a viable option – at least for the duration of the contract. However, logic has been completely thrown out the window and instead replaced with a need to explore different music management, as Kesha simply wants out!

Kesha leaves the New York State Supreme Court on February 19, 2016 in New York City. Sony has refused to voluntarily release the pop star from her contract which requires her to make three more albums with producer Dr. Luke, a man she claims, without sufficient evidence according to the court, sexually assaulted her. FameFlynet