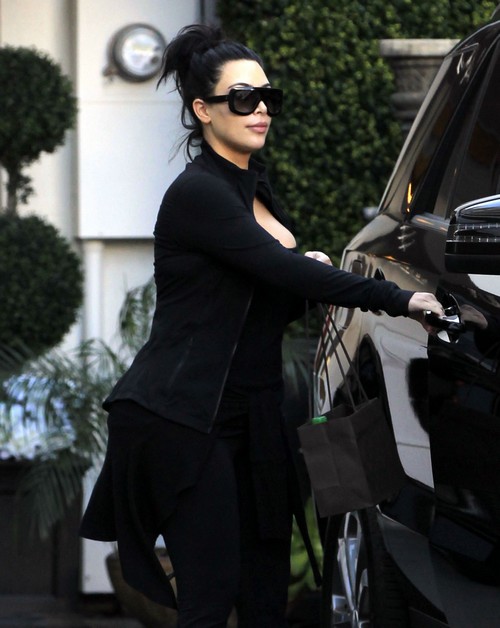 If Kim Kardashian doesn’t divorce Kanye West at this point – the reality TV queen would be committing career suicide … and she knows it. Kanye West has officially lost his marbles, he has even beautifully documented his descent in to madness on his Twitter timeline for the world to see. And, every day his tweets get more and more bizarre – and his behavior more erratic.

Kim Kardashian’s husband has always been a few cans short of a six pack, but since the birth of their son Saint West – he has truly let his crazy flag fly, and alienated any celebs the power couple still had in their corner. Over the course of the past month Kanye has gotten in to a Twitter feud with Wiz Khalifa, dissed Taylor Swift (again), announced he is $53 million in debt, and then publicly begged Facebook founder Mark Zuckerberg for money. Let’s not forget offering his support to Bill Cosby.

Last week Kanye West filmed an episode of Saturday Night Live, and reports hit the internet that he was acting like a basket case and Kim Kardashian was called out of the audience to the backstage area to try and talk some sense in to him.

SNL cast member Aidy Bryant appeared on Bravo’s ‘Watch What Happens Live’ to discuss the ordeal with Andy Cohen. But, according to Bryant – Kanye’s meltdown wasn’t even the most entertaining part of the night, it was the fact that his own wife Kim Kardashian refused to be on stage with him.

Bryant dished to Andy, “At dress rehearsal, he brought Kim up on stage for goodnights, and she kind of was nervous and like, ‘Why am I here?’” Bryant added, “She was like, ‘This is not my show. I shouldn’t be up here.’ And I was like, ‘You’re fine girl!’ Then she went and stood down weirdly in front of the audience. It was exciting for me.” Bryant went on to say that during the live show she tried to get Kim on stage again – and Kim flat-out refused.

Kim Kardashian has built an entire career basically on just being “Kim Kardashian.” She sees the writing on the wall, and she knows that Kanye West is killing her so-called career, slowly but surely.

Kim might be loyal to West, but if she has to choose between making money and playing house with the crazy rapper – she is going to choose money every day. It will be a miracle if Kanye isn’t served divorce papers as soon as Kris Jenner gives Kim permission.

Kim Kardashian stops by the Epitome Dermatology clinic in West Hollywood, California on February 16, 2016. Like the rest of the world Kim is tired of husband Kanye West’s Twitter rants. FameFlynet