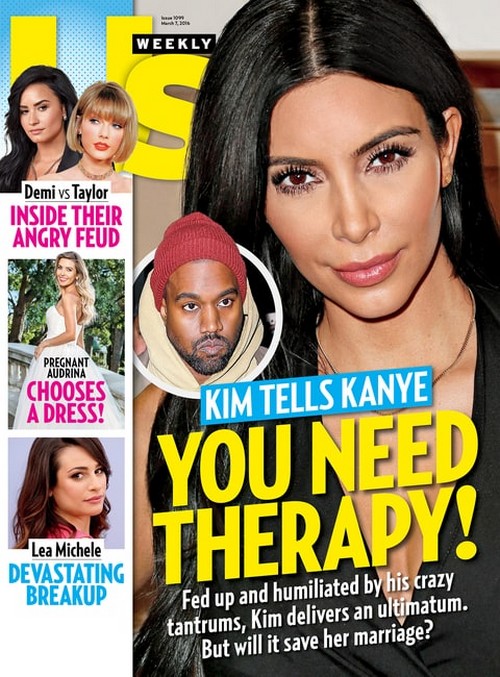 Kanye West acts like he is crazy – there is no question about it, we can all agree that the rapper needs help. Even his wife Kim Kardashian has had enough of the madness. Rumors of a Kimye divorce have been swirling for months now. And, it looks like Kim is really considering walking if her crazy hubby Kanye West doesn’t get some much needed help for his obvious mental illness.

This week’s cover of US Weekly features a photo of Kim Kardashian and Kanye West – the headline reads, “Kim Tells Kanye – You Need Therapy!” The front page of the tabloid goes on to tease, “Fed up and humiliated by his crazy tantrums, Kim delivers an ultimatum. But, will it work?”

It’s safe to assume the “ultimatum” that Us Weekly is referring to is Kim and Kanye’s rumored divorce. CDL has been reporting for weeks that Kim has been trying to put some distance between herself and her husband in the media, because Kim will be damned if Kanye destroys her career while he is sinking his own like that Titanic.

So, will Kanye West choose to go to therapy instead of losing his wife Kim? Well, apparently it is quite the toss-up. According to US Weekly Magazine’s inside sources, “Kanye hasn’t agreed to anything yet.”

Maybe he thinks Kim Kardashian is all talk and would never actually leave him He might want to think twice though because after his most recent Twitter rant last night (in which he dissed producer Bob Ezrin, Taylor Swift, and Macklemore) – we are sure Kim has reached her limit.

What do you guys think, will Kim Kardashian really divorce Kanye West over his crazy temper tantrums and wild Twitter rants? Or is she all talk? Will Kanye go to therapy – or would he rather give up his family than admit defeat and get help? Let us know what you think in the comments below!