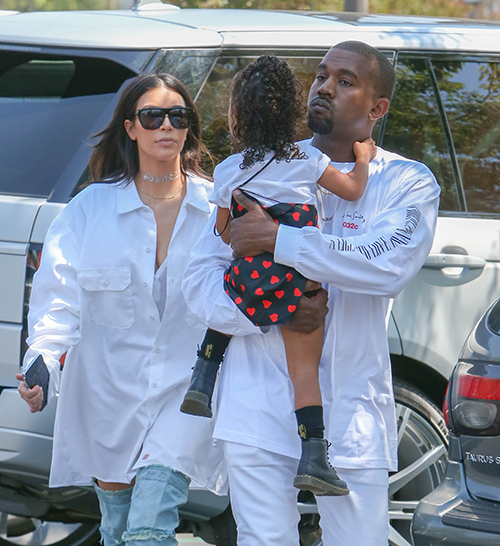 Kim Kardashian’s obsession with beauty and perfection might have gone a little too far here. In fact, there’s new speculation that the ‘Keeping Up With The Kardashians’ star is becoming a “monster mom” to her 3-year-old daughter North West because she allegedly spray-tanned her face.

This isn’t the first time Kim Kardashian’s parenting skills have come under fire. The reality television star has long been criticized for pulling North West’s hair too tight in a bun and not allowing her natural, curly hair be set free. To make matters worse, Kim Kardashian has even been rumored of thinking about taming her daughter’s unruly eyebrows by waxing them (a report that Kim Kardashian herself has vehemently denied).

But it wasn’t until Kim Kardashian’s best friend Chrissy Teigen revealed that she was afraid to breastfeed her daughter Luna after a spray-tanning session during a short clip she posted on her Instagram account. And that’s when Kim Kardashian flat out admitted that she accidentally tanned North West’s face while nursing her several years ago. Chrissy Teigen captioned her Instagram clip with, “(We have not spray tanned our babies) (today).”

Jokes aside, it looks like Kim Kardashian is more preoccupied with her looks and her beauty routine than with her daughter’s own health and well-being. And that’s probably why North West always looks so miserable and upset whenever she’s out and about with her famous mother.

Kim Kardashian is so obsessed with her presentation that there’s no doubt she makes sure North West looks just as flawless as she does whenever the paparazzi are around. Because, after all, North West is an extension of her famous mother. And if the 3-year-old tot looks bad, then it’s a poor reflection of Kim Kardashian’s image and brand.

So far, Kim Kardashian has not made any additional comments on the spray-tanning incident, but there’s little doubt that she learned her lesson from it. There’s very little chance that Kim Kardashian would give up spray-tanning if it affected her children’s well-being. In fact, she would probably forgo breastfeeding altogether if it meant she couldn’t keep up with her beauty routine anymore.

Still, no baby should be accidentally spray-tanned in the face during breastfeeding. The last thing any baby wants is a mouthful of chemicals. Tell us, CDL readers, what do you think? Is Kim Kardashian a ‘monster mom?’ Is North West’s health at risk because of her mother? Let us know your thoughts in our comments section.