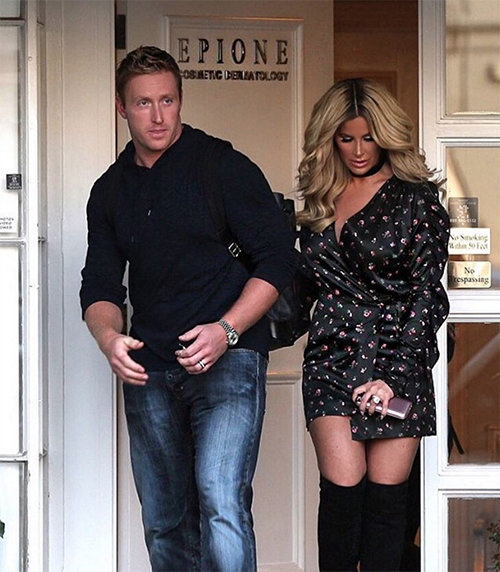 Is Kim Zolciak pregnant with her seventh child? That’s what all the internet buzz seems to be after the former ‘Real Housewives of Atlanta’ star was spotted out and about with what looked like a baby bump. In fact, many fans can’t help but wonder if she’s pregnant, despite her serious financial crisis, considering her husband Kroy Biermann is currently unemployed.

According to In Touch Weekly, Kim Zolciak and Kroy Biermann were spotted leaving the Epione plastic surgery center in Los Angeles, where the reality television star was supposedly getting her ‘cellulite dimples perfected.’ Kim has made it no secret that she relies on procedures to keep up with her appearance, but is she hiding another secret she’s not willing to share just yet?

Even though Kim’s Instagram photo show off her tight stomach, the mother-of-six looked noticeably rounder in her mid section, which many observers can’t help but say looks like a baby bump.

Then again, does it really make sense for Kim Zolciak to get pregnant now? With six kids in their household, another one would definitely put more strain on Kim and Kroy’s already fragile marriage and current financial situation. Kroy was cut from the Buffalo Bills last month and with no potential employment opportunities in sight, there’s a good chance that his NFL career might already be dead. And considering how much Kim Zolciak spends on her very exuberant and lavish lifestyle, there’s no doubt that Kroy is worried about his fortune going to waste, especially since he’s been the main breadwinner in the family for so long.

Of course, Kim hasn’t made any comments about the pregnancy buzz just yet, but knowing how she loves the media speculation, there’s no doubt that she’ll say something sooner or later. It wouldn’t be surprising if Kim was indeed pregnant because, after all, her large family and multiple pregnancies has helped keep her name in the headlines.

Tell us, CDL readers, do you think Kim Zolciak is pregnant with another child? Is Kroy Biermann worried that the couple might end up bankrupt and broke with the way she’s been spending their money? Drop us a line with your thoughts and of course, don’t forget to check back with CDL for all the latest news and updates on all of your favorite celebrities right here!

Kim Zolciak and Croy Biermann grab a bite to eat in Beverly Hills, California on October 15, 2016. They two left arm and arm from Il Pastaio. FameFlynet

On your mark.. get set.. go! Lol!! Kroy always looking out for me You know I had to get those cellulite dimples perfected Thank you @simonourianmd1 (video coming tomorrow) my glam killed it today thank u @ash_kholm @bpalestino

My ❤️, soul, best friend, confidante, my everything!

Awe! I didn’t know @briellebiermann made a snap of this! I don’t do elevators and after my last interview today I was sleepy so my hubby carried me down 10 flights on his back

How beautiful does my wife look in her @diffeyewear shades? That style was just restocked and a percentage of all sales go to charity, so go grab yours today! You can use my code “KROY10” to get 10% off on diffeyewear.com