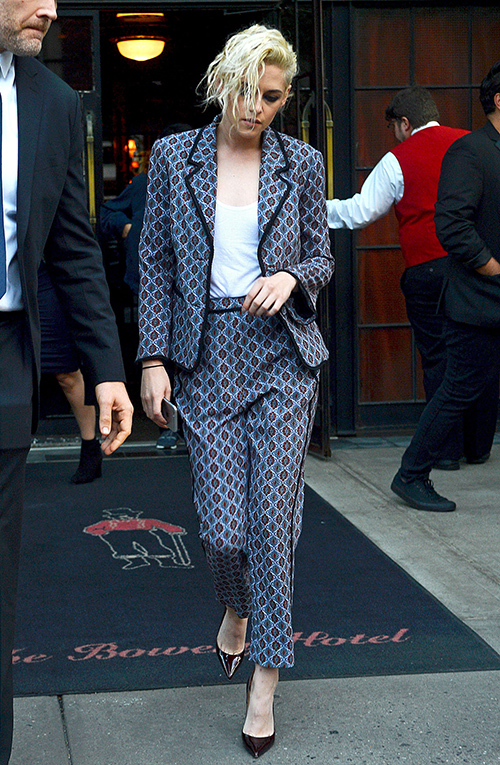 Is Kristen Stewart cheating on Alicia Cargile? That’s what both fans and critics alike can’t help but wonder as the Hollywood actress was spotted leaving the Bowery Hotel in New York City with model Cara Delevingne’s ex-girlfriend, St. Vincent, after the premiere of ‘Certain Women’ earlier this week.

Of course, this isn’t the first time that Kristen was spotted with St. Vincent, as the two women have been out and about several times with each other while in the Big Apple. It’s also been weeks since she has last been seen with her girlfriend Alicia, leading to the speculation that she might be cheating on her with her new girlfriend. That, or she’s sending a clear message to both Alicia and the media that she’s moved on, whether her girlfriend likes it or not.

Sure, Kristen Stewart might claim to hate the paparazzi and all of the Hollywood attention she gets, but clearly she knows what she’s doing by parading her new friendship and possible romance with St. Vincent all around the Big Apple. The two women have been photographed everywhere, leading many to believe that they have even spent the night together at Kristen’s suite in the Bowery Hotel. If Kristen is indeed cheating on Alicia, she’d doing it in a very public and spiteful way, which is no doubt providing even more insight to her supposed selfish character.

After all, if there’s one thing that Kristen Stewart doesn’t know how to do, it’s stay faithful to her partner and their relationship. The actress cheated on her former boyfriend Robert Pattinson in her affair with her director Rupert Sanders. Their scandal led to not only Rupert Sanders and Liberty Ross’s divorce, but also Robert Pattinson believing that he could never trust her again.

Kristen Stewart cheating on Alicia Cargile just proves again that the only person the actress is cares about is herself. Clearly, Kristen doesn’t have the emotional capacity to stay true to one person, as her selfish behavior once again demonstrates.

Take a look at our photo gallery below and tell us, do you think Alicia Cargile will break up with Kristen Stewart after finding out that she’s supposedly cheating on her? Let us know your thoughts and, of course, check back with CDL for all the latest news on Kristen Stewart and all of your favorite celebrities right here.