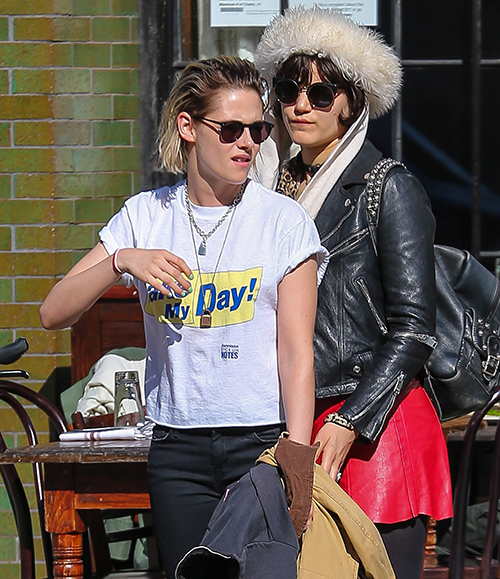 Kristen Stewart is smitten with her new girlfriend, Soko. The hot new couple has been inseparable since K-Stew’s break-up from Alicia Cargile. However, the Twilight actress’s pals are apparently not too fond of the new lady in K-Stew’s life – and they want Soko out of the picture ASAP.

The problem with being Kristen Stewart (ridiculously rich and famous with a successful career to boot) is that you never know who genuinely cares about you and who only cares about using their relationship with you for their own gains. Kristen Stewart’s friends are convinced that Soko is dating Kristen for all of the wrong reasons, and is just using the actress to further her own career.

Soko has a decent music career in Europe – but she desperately wants to expand her brand to the United States and land the big break that she has been waiting for. So, it seems a little too convenient that her relationship with Kristen Stewart seems to have come at a perfect time – and has already drastically increased her fan following. Does anyone else think this sounds an awful lot like Robert Pattinson’s relationship with FKA Twigs?

Kristen Stewart’s pals are encouraging the actress to cut Soko loose. An insider dished in this week’s edition of OK! Magazine, “They don’t think it’s a coincidence that Soko is pushing their relationship out in the open. It all seems very calculated, especially since Soko was the one who pursued Kristen so hard.”

Kristen’s pals may be fretting over nothing. Stewart and Soko haven’t been dating for long and this may just be a phase. However, if they are in it for the long haul, there is a good chance that K-Stew could get her heart broken when Soko’s true intentions begin to shine through.

What do you guys think? Is Soko just using Kristen, or is their relationship the real deal? Are Kristen’s pals being paranoid, are they wrong to encourage a break-up? Let us know what you think in the comments below!