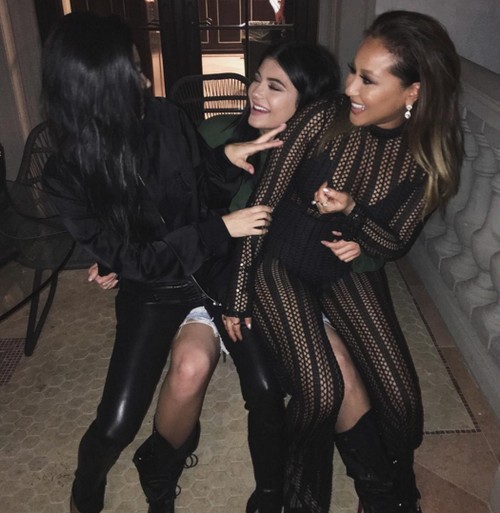 Kylie Jenner and Kourtney Kardashian took to Instagram over the weekend to diss Blac Chyna, and throw some obvious shade at their brother Rob Kardashian’s new girlfriend. Kylie and Kourtney are the more subtle and passive aggressive members of the Kardashian Klan. They are more apt to sneak-diss somebody, than come right out and let their feelings/opinions be known.

Kylie Jenner and Kourtney Kardashian made it pretty clear that they do NOT support Rob’s new girlfriend Blac Chyna by hanging out with his old girlfriend Adrienne Bailon, and blasting Instagram with pictures of the together.

On Sunday February 28 Kourtney shared a photo of herself posing with Kylie and Adrienne, and she captioned it: “Reunited best friends lol.” Kylie went a step further and even referred stated that she and Adrienne Bailon “are sisters.”

It’s no surprise that Kylie wanted to let the world know that she was “sisters” with Rob’s ex Adrienne – it’s her way of making it clear that she will never support his relationship with Tyga’s baby-mama Blac Chyna. Adrienne dated Rob back in 2008 ish, Kylie was 10 then, so how close could she and Bailon really be?

So far neither Chyna nor Rob have addressed the fact that Kylie and Kourtney spent the weekend hanging out with Rob’s ex-girlfriend and praising her on social media. Chyna is the Queen of Petty though, we’re sure she will find a way to reference Adrienne and Rob’s sisters’ undercover shade before the week is up.

Do you think that Kylie and Kourtney posted those photos just to get under Rob and Chyna’s skin? How will they react? Let us know what you think in the comments below!