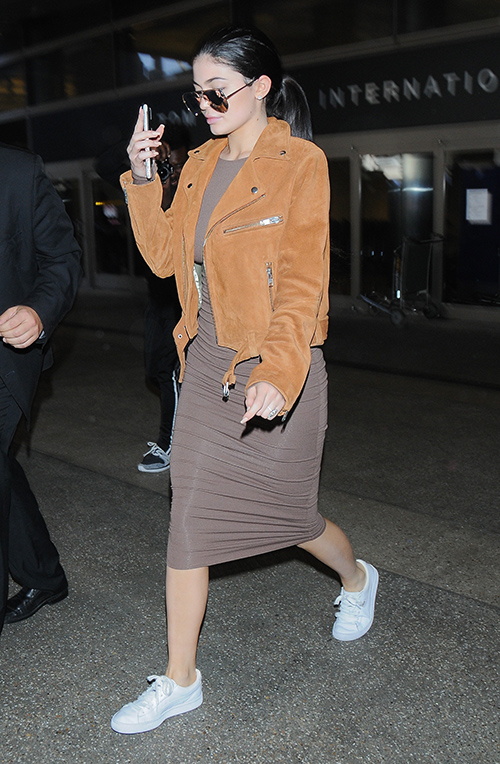 Kylie Jenner’s baby bump has everyone guessing: is the ‘Keeping Up With The Kardashians’ star pregnant with Tyga’s child? That could possibly be the case, as fans know all too well that a Kylie Jenner pregnancy would not only rock the Kardashian world, but also be the scandal of the year.

Reports indicate that Kylie Jenner’s baby bump is the talk of the town as the 18-year-old reality television star was spotted desperately trying to conceal her stomach with a jacket while she was spotted at LAX with her entourage. Kylie Jenner pregnant with Tyga’s baby of course wouldn’t be the worst thing to happen to the Kardashian family. They’ve gone through worse things this past year, including the Lamar Odom overdose and the Kourtney Kardashian and Scott Disick break up – but it surely would raise a lot of eyebrows in the media.

According to In Touch Weekly, even though Kylie Jenner’s baby bump is quite visible at this point, she’s managed to stay mum on the subject – at least with her close circle of friends and family. Many insiders have noted that Kylie herself has been doing everything she can to conceal her bump, including wearing oversized sweaters and jackets in the Los Angeles summer heat.

Perhaps she’s not ready to reveal her pregnancy news to her mom Kris Jenner? Or maybe she’s worried what her sisters Kim Kardashian and Khloe Kardashian might think? Whatever the case, something is definitely going on.

With the Robert Kardashian and Blac Chyna pregnancy news dominating headlines, there’s a chance the young starlet is waiting for the right moment to reveal her big news to the world. That, or she’s just not sure her boyfriend Tyga might stick around for better or for worse. After all, the couple has gone through some turbulent times – breaking up and getting back together again several times in the last few years.

Whatever the case is, one thing is for certain: Kris Jenner will no doubt milk this pregnancy any way she can with future Kylie Jenner Teen Mom spin-off shows and possibilities. It’s a crazy idea, but knowing how the Kardashian functions behind closed doors, anything is possible with this reality television star family. Kris Jenner’s age hasn’t stopped her from being one of the most manipulative, if not savviest, businesswomen in the celebrity world right now.

What do you think, CDL readers? Kylie Jenner’s pregnancy might be a good thing for her mom Kris Jenner and her ‘Keeping Up With The Kardashians’ empire, but will it keep her boyfriend Tyga by her side once and for all?