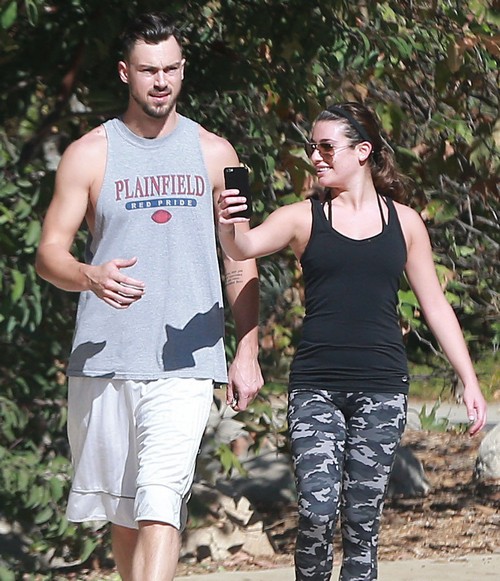 Lea Michele and alleged former male prostitute Matthew Paetz breakup after a two year relationship, the Scream Queens actress is understandably heartbroken. Us Weekly reports that the breakup happened earlier in February 2016 and the development left Michele crushed and struggling to come to terms with being single again.

Persons close to Lea said that the actress hoped for a chance at reconciliation – but that Paetz “…won’t take her back”.

Forced into accepting the reality that she could no longer count on Matthew Paetz to be her core, Lea Michele has called on the constant presence of her close friends and family for support. People reports that the actress has been getting better since the split, and that she is determined to focus on acting, music and an upcoming album.

Lea Michele and Matthew Paetz began dating in 2014 after meeting on the set of Michele’s music video “On My Way”. Since that time, the couple had been inseparable, sharing romantic vacations across the world. It was a common occurrence seeing them pour on the public displays of affection while enjoying date nights out on the town.

Her relationship with Paetz was one she felt confident her late boyfriend and Glee co-star Cory Monteith, would have approved of and endorsed. This was the first relationship Michele had since Monteith died from a combination of heroin and drug overdose in July 2013.

Speaking in a Fempire Podcast release in January 2016, the former Glee TV series star was in a rose colored bubble and in complete awe of Matthew Paetz. In the interview Lea Michele sang his praises and described their two-year long relationship as the strong base of support that she needed particularly after the painful loss of Cory Monteith.

She further explained that with the pressures of acting, the relationship they shared was “…a solid unit, and that’s really what we’ve been since day one”. Her glowing view of Matthew Paetz was seemingly cemented with rumors coming out of OK Magazine that the couple had gotten engaged in January 2016.

Michele was in for quite a shocker however as just weeks after her declarations on the Fempire podcast, their relationship fell apart. The Scream Queens actress had said her relationship with Paetz had a hard core, one that he would not have allowed anything to crack.

Lea Michele’s recover from this will certainly be difficult especially with that core being cracked, particularly after the openness with which Michele expressed which showed that she had a deep emotional dependence on the top model.

So was this a case of Matthew Paetz losing confidence in his position as the number one guy in Lea Michele’s life? Despite his claims of understanding the place Cory Monteith had in her life, were there deep seated insecurities that a needy Lea never addressed?

Lea Michele and her boyfriend of two years, Matthew Paetz have broken up. Rumors hint that it was Paetz’s decision. FameFlynet