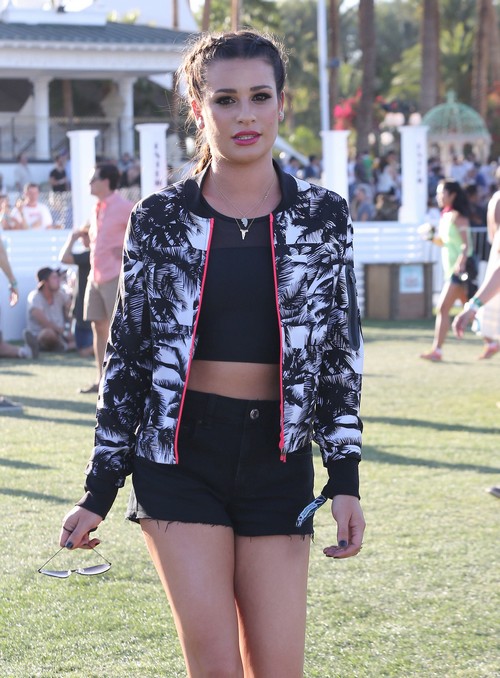 Lea Michele wore a racy black outfit at the Coachella Music Festival. Is Lea looking for a new boyfriend? The sports bra and super tight shorts will lure the men out, that’s for certain. The Coachella Valley Music and Arts Festival kicked off its first weekend on April 15, 2016.

Lea spent the second day of the festival walking around in a skintight black Fabletics outfit from the Kate Hudson collection.

The ‘Screen Queens’ star paired a sports bra and bottom-hugging shorts with high-heeled black ankle-high boots. Was this super sexy outfit a signal to the thousands upon thousands of guys at the art and music festival that Lea is ready for a new boyfriend?

It’s been just a couple of months since Lea had a man in her life. The former ‘Glee’ actress split from boyfriend Matthew Paetz, the former escort, in February. Before that Lea dated co-star Corey Monteith from 2011 until his death in 2013 but that was very possibly a showmance. Lea also dated ’Glee’ co-star Matthew Morrison for a brief time before Monteith.

It’s been difficult for Lea Michele since Cory Monteith died of an accidental overdose on July 13, 2013. Lea has healed by dedicating her debut album to Cory. As another tribute to her late boyfriend, Lea recently got the number 5 tattooed on her ribcage.

Lea posted a photo and wrote, “And one more…for my Quarterback. #5.” Lea showed of the tattoo just a few days before attending the second day of Coachella.

How will fans take it if Lea does find a new boyfriend? There was a lot of hate when Lea started dating Matthew Paetz about a year after Cory’s death. Whenever the actress and singer posted photos of the couple on social media there would be an overwhelming amount of anger directed at Lea.

The weather at Coachella is ridiculously hot and humid. Lea could be wearing the figure-hugging outfit simply to stay as cool as possible. She could also be promoting Kate Hudson’s new line of Fabletics wear.
An added bonus of looking so great might be that Lea Michele finds love in the arms of a new man.

Lea Michele is looking fabulous in her Fabletics by Kate Hudson outfit while at Day 2 of the first weekend of The Coachella Valley Music and Arts Festival in Coachella, California on April 16, 2015 by FameFlynet

Having a blast at #Coachella in my fab @Fabletics gear! #ad