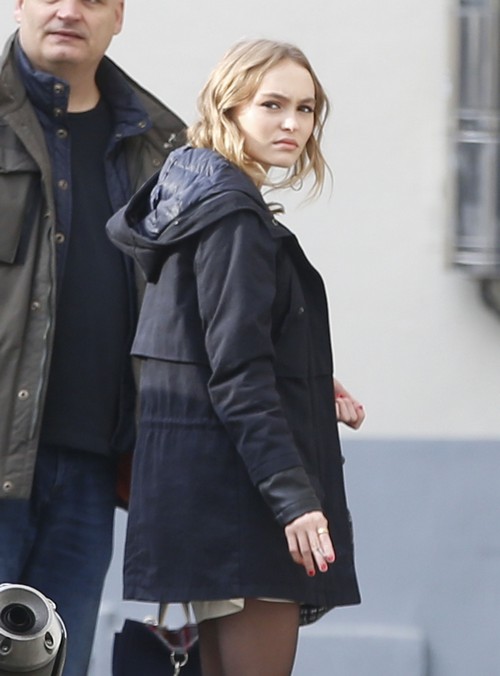 Lily-Rose Depp was spotted smoking a cigarette and giving the nearby paparazzi some rather dirty looks while she was out and about in Paris this week. Johnny Depp and Vanessa Paradis’ daughter was apparently chatting with a few friends before heading to a business meeting in the French capital.

The young rising Hollywood star was in rather good spirits and at one point was even dancing with a cigarette before giving photographers nasty, disapproving looks before heading inside a building.

Of course, it’s needless to say that Lily-Rose Depp wouldn’t even be getting any paparazzi attention if it weren’t for her famous parents. Before his nasty divorce from Amber Heard, Johnny Depp was long considered to be a Hollywood heartthrob and A-list star while Vanessa Paradis is one of the biggest names in French cinema.

Knowing that her parents’ status in the industry would help promote her own career, Lily-Rose Depp has done everything she can to ride on their Hollywood coattails, knowing that it will help give her the modeling and acting career she so desperately wants.

Rather than going to college and getting an education, Lily-Rose, just like the Kardashians, Jenners, and Hadids of the entertainment world, is using her family’s name and Hollywood nepotism to do what other young girls her age can only dream of one day having. And that’s appearing in couture campaigns and nabbing roles in films opposite stars such as Natalie Portman, regardless of whether or not she has the qualifications or even any talent for it.

If that weren’t upsetting enough, Lily-Rose Depp is also proving that she is doing ultimately what she wants, despite what her parents Johnny Depp and Vanessa Paradis might think of it. Even though Johnny has earlier said that he would rather not see her pursue a career in modeling, he hasn’t done much to persuade her to continue her education while out of the spotlight.

After all, Lily-Rose Depp is only 17 but she’s already making her own decisions as an adult, further proving that she’s clearly inherited her parents’ independent, if not rebellious streak.

Take a look at our photo gallery below and tell us, do you think Lily-Rose is desperately using her parents Johnny Depp and Vanessa Paradis to become a major Hollywood star? Does Lily-Rose Depp even have a chance of becoming a major player in the entertainment world? Let us know your thoughts in our comments section. Also, check back with CDL for all the latest news on Lily-Rose Depp.