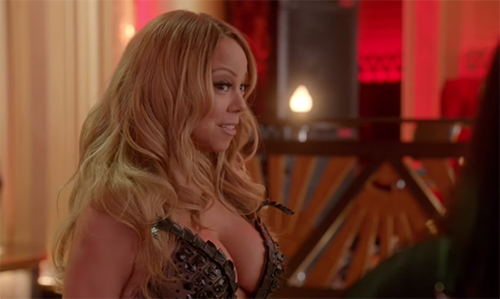 ‘Empire’ season 3 spoilers give a first look at Mariah Carey as the character Kitty, who definitely plans to shake things up. Fans also get a sneak peek at what the Lyon Family will be up against. Mariah’s character Kitty will collaborate with Jamal [Jussie Smollett]. In the ‘Empire’ spoiler trailer for season 3, fans get quick look at Kitty in the recording studio with Jamal.

But it also appears Kitty will interact with Lucious [Terrence Howard] and Cookie [Taraji P. Henson] as well. In the ‘Empire’ spoiler trailer, Kitty says, “You always got a trick up your sleeve.” It’s not clear who Kitty is speaking to, but Lucious and Cookie are the powerhouses who always have an agenda.

There has been much speculation about a Cookie and Lucious reunion. The Empire first look spoiler video – ‘Kill Or Be Killed’ – teases that the love affair between the two isn’t over. A tearful Cookie faces Lucious who says, “As long as I see that fire in your eyes, I know we’re still good.”

Whether or not Cookie and Lucious are together, nothing is going to break the Lyon Family. Not Lucious’s nemesis Shyne Johnson [Xzibit] and certainly not Tariq [Morocco Omari].

Tariq is Lucious’s half-brother – and the Fed who busted the music mogul during the ‘Empire’ season 2 finale. Looks like Tariq is going to pressure Cookie into turning on Lucious. “This doesn’t have to get ugly, Cookie. I can come after you, your kids.”

Mariah Carey is just one of the many guest stars that will appear in the third season of ‘Empire.’ Taye Diggs [Angelo Dubois] may tempt Cookie into a new romance. Could Mariah Carey be a new love interest for Lucious?

When ‘Empire’ returns for its third season on Wednesday, September 21 at 9 p.m. ET on FOX, one thing is for certain: things are going to be hotter, fiercer, and bolder than ever. What do you think about the new Mariah Carey Empire season 3 situation?