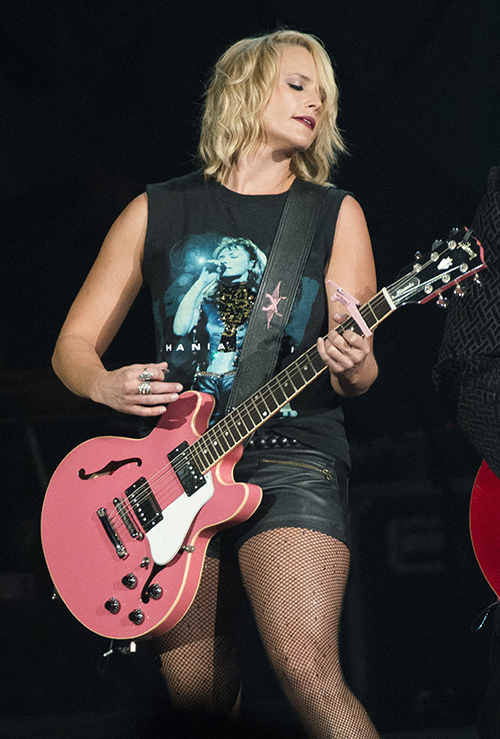 Miranda Lambert, Blake Shelton, and Gwen Stefani are rocking the Twitter boat and we’re all watching and waiting with bated breath to see how this will all play out, or fizzle out. Late last month, Miranda Lambert followed her ex-husband Blake Shelton’s new girlfriend, Gwen Stefani, on Twitter. It is common courtesy to follow back. Well, Gwen didn’t. She pretty much just left her hanging there. As lame as it sounds, that act spoke volumes.

But, with that being said, why on earth is Gwen taking to liking Miranda’s Twitter status about her beloved grandma? Is this supposed be some sort of olive branch? And if so, why not just follow her back on Twitter and call it good?

Miranda Lambert shared this Tweet, “Her name embroidered inside is priceless. A family heirloom I will cherish forever. I’m so thankful for her and all the things I have learned from her. Nonny is strong, beautiful, feisty and most of all, loving.” #grandmastreasures #diamondsfurandwhiskey #wandathewanderer

Gwen “liked” it and that was it. No comments, no follow. Just a simple like. It seems that Miranda and Gwen are trying to make nice on social media when all they really want to do is have a full on brawl and tell each other what they really think of one another.

Ever since fellow Voice coach Gwen Stefani and Blake became an open item, Miranda has been struggling with the fact that he moved on and well, he scored big. What’s not to love about Gweni Gwen Gwen? Blake is a family man and wanted to build a family with Miranda, she burned that bridge and now she has to live with it. Yes, Lambert has “moved on” as well, but let’s be real. Her new guy has got nothin’ on what Blake and Gwen have got heating up.

Lambert’s new guy is of course another crooner, Anderson East. He’s an up and coming artist with some sordid skeletons in his closet. He’s not bad to look at and he is a very young 27. This could be a good thing though for Miranda: he doesn’t want to start a family and only wants to stay focused on her career. I think it’s safe to assume that Anderson East won’t be thinking about kids anytime soon. So perhaps they will have a “perfect” relationship without the pressures of balancing family with career.

As for Blake Shelton and Gwen Stefani and their future in the “family category,” they are already there. With Stefani’s three kids already in the picture, it’s safe to say that Blake will start to feel right at home. But will Gwen be willing to have a fourth baby if their relationship continues? Who wouldn’t love to see this relationship in for the long haul? Stay tuned, I have a feeling that this one is just getting started.