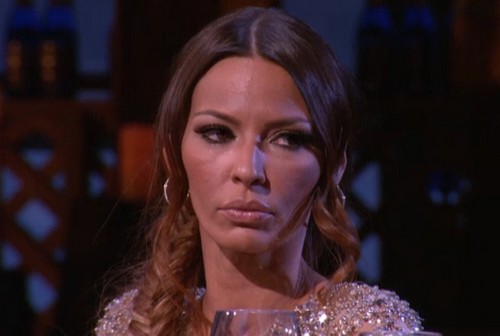 Mob wives star, Drita D’Avanzo was in a nasty fight on February 9. The victim, Mary Bratti was hospitalized following the video taped attack and beating. Mary Bratti gave TMZ a video of the fight.

They are reporting that the fight all started over, of all things a parking spot. Mary Bratti is saying that Drita D’Avanzo’s husband, Lee D’Avanzo likes to take her reserved parking space outside of her home. How rude!

Maybe Lee D’Avanzo, being the supposed mob guy that he is, is used to just taking what he wants and not getting too much flack for it because he is well, an alleged mob guy. Apparently Mary Bratti wasn’t too concerned with the whole mob factor, so she decided to stick up for herself and her said parking spot. Not her best move, I’d say. Things clearly didn’t go her way as the video shows her getting a pretty massive beat down from Drita.

Drita was arrested on misdemeanor assault charges following the altercation. Mary went to the hospital to get checked out by medical professionals after the fight. She told TMZ that later on, after the fight, she passed out from the amount of pain she was in. She added that she got a CT scan while at the hospital and the results showed that she suffered a minor concussion.

Mary shared with them that she is having home security cameras installed around her house and will be requesting an order of protection because she and her family are now living in fear of Drita and Lee D’Avanzo.

Who can blame her though, right? Alleged or not. Not too many people would hold up well against anyone with the term ‘mob’ attached to them. The same source reveals that Lee D’Avanzo has already done prison time for bank robberies and more…, a true low-life criminal. Mary claims that Lee has been harassing her sine that fight went down. Sounds like a bit of a bully situation, doesn’t it?

What do you guys think? Should Drita D’Avanzo be charged with more than a misdemeanor? Or does that punishment fit the crime? What about Lee? Do you think he should be getting charged with harassment or uttering threats or something?

Do you think that Drita D’Avanzo gave Mary Bratti a beat down just to boost her Mob Wives ratings? Sound off in the comments below and be sure to check back here at CDL for all your Mob Wives news!