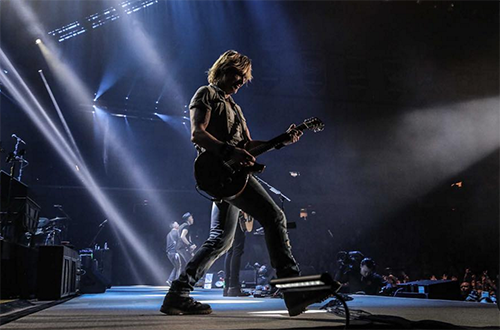 It looks as though Nicole Kidman won’t make a divorce announcement anytime soon, or at least until the upcoming awards season is over. Reports indicate that the Hollywood actress is tipped to be in the running for an Oscar nomination and that’s why she’s delaying her Keith Urban divorce until next year.

According to the Sydney Morning Herald, Nicole Kidman is getting plenty of buzz for her role in the critically acclaimed Australian film, ‘Lion’ in which the actress plays an adoptive mother to an Indian-Australian man. Nicole promoted the film at the 60th BFI London Film Festival with her husband Keith Urban nowhere in sight, signaling once again that the couple’s rocky marriage is going through yet another rough patch.

Of course, this isn’t the first time Nicole has been forced to make a red carpet appearance without Keith. He was also noticeably absent at the Toronto International Film Festival earlier this summer. And while he hasn’t been there to help his wife promote her latest film, Keith Urban has been hinting at trouble in paradise in several of his latest interviews.

Both have admitted to having major ‘ups and downs’ in their marriage. The country singer even went as far as admitting that he and Nicole have blow-out fights that end up with him leaving the house. To add insult to injury, Keith even called his marriage to Nicole ‘a learning curve’ above all else. Needless to say married couples fight but are things so bad between Nicole Kidman and Keith Urban that he has nothing nice to say about her anymore?

For Nicole Kidman though, she knows that she has to keep her marital issues off the radar until awards season is over. Even if she doesn’t win an Oscar, her nomination will force her to do plenty of media rounds and the last thing she wants to do is talk about her marriage, knowing all too well that it’s in crisis mode. But if Keith continues to ditch his wife on the red carpet, Nicole won’t have any choice but to come clean with the truth one way or another.

Tell us CDL readers, do you think Nicole Kidman and Keith Urban are waiting until next year to get divorced? Is Nicole stalling her personal problems by putting her career first? Let us know what you think!

Bismarck, ND!!!!! Tonite was so loud, the energy was through the roof! Thank you to everyone who came from near and far! AND – we announced that we’re going to be ringing in 2017 in Nashville!! It’s going to be AWESOME! – KU #ripCORDWorldTour #NashvilleNYE

Highest energy tour we have ever done in Canada!!! Thank you! Can’t wait to come back! And thank you @DallasSmithmusic for an awesome tour brotha!! Love you! – KU #ripCORDWorldTour 🇨🇦