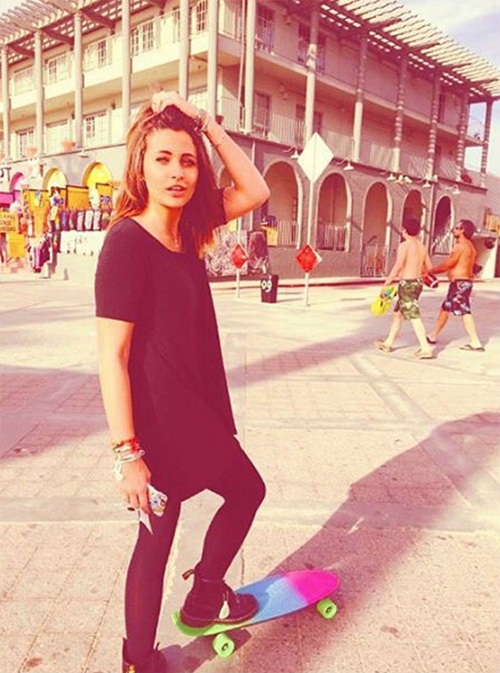 Is Paris Jackson really a teenage alcoholic? It looks like she might just be following in her father Michael Jackson’s footsteps with her addictions. Paris Jackson is just 17 years old, on the verge of turning 18, and she’s already attending Alcoholics Anonymous sessions. Of course, it’s good to know that she is seeking help for her addiction nonetheless it is very sad to see you teenager struggling with alcohol.

You must remember that back in 2013 Paris Jackson attempted suicide by popping pills and cutting her wrist. The National Enquirer is reporting that Paris went off on a rant on her Instagram page placing blame for her suicide attempt as well as her father Michael Jackson’s death on all the pressure that comes in from fans in all of their hateful comments.

The famed teenage daughter of Michael Jackson ranted, “This is f*****g ridiculous. I am expecting to literally sit on my ass all day replying to comments people leave me (positive and negative)? I have AA meetings to go to. Family obligations. Personal obligations. It’s so f*****g selfish that I am literally attacked on every f*****g thing I post just because people that I DON’T EVEN KNOW aren’t getting what they want. I don’t know any of you. I appreciate the love and support, but the expectations are f*****g ridiculous. The expectations for my DAD were f*****g ridiculous. He didn’t owe you anything, yet he was ripped to shreds daily. I will not let that happen to me.”

When you look at it that way, you can’t really blame the poor girl for all of her rage and confusion. How many teenagers out there could cope with the death of their father, all the fame that came with Michael Jackson, and just being a teenage girl without a father in general?

To add insult to injury, NE is reporting that British actor, Mark Lester is trying to lay claim to Paris Jackson. How so? Mark Lester says that he could be Paris Jackson’s father because he allegedly donated his sperm to her mother Debbie Rowe. Whether or not and that is true, it has got to be adding mental fuel to the fire for Paris.

Radar Online is reporting that Paris Jackson has been fighting with her grandmother Katherine Jackson who Paris currently lives with and wants to move out and move in with her mother Debbie Rowe. Radar’s insider revealed, “Paris is just fighting with her grandparents nonstop and the only ones that she is opening up to right now are her friends.” They added that Paris is “trying to convince [her grandparents] that they should let her move in with her mother Debbie Rowe.” Katherine Jackson has got to be very broken over all of this.

Paris Jackson will be turning 18 on April 3. That will make her a legal adult and enable her to make decisions on her own, legally. Let’s just hope and pray that the decisions she makes as an adult we’ll be wise ones.

What do you guys think about all of this? Do you see Paris Jackson we’ll be okay? Or do you think that she will follow her father’s footsteps to the grave? Sound off in the comments below and be sure to check back here at CDL for the latest news on all your favorite celebrities.