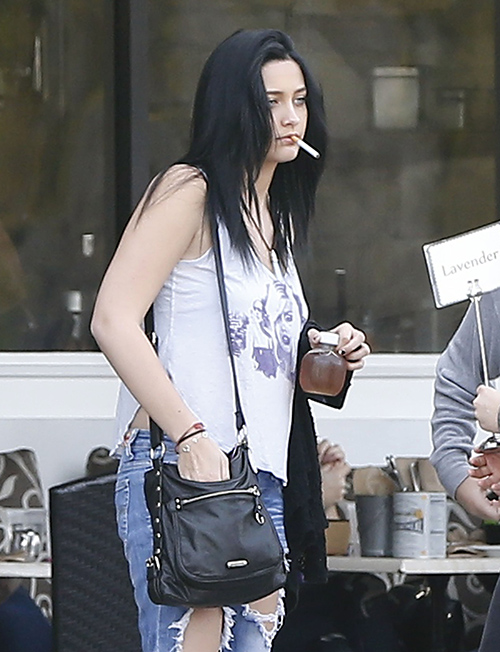 Take a look at photos of Paris Jackson’s drastic new look! Paris’s hair color has gone from scarlet to black. Does this change have the Jackson family worried? Maybe Paris isn’t over Chester Castellaw? As previously reported, Paris hasn’t been obeying any of grandmother Katherine Jackson’s rules since her nasty split from Castellaw.

The teenager has ignored curfew – Paris comes and goes as she pleases. Not only that, Paris has started smoking. On Saturday, January 16 – the same day Jackson change her hair color – Paris was waiting for a table at a restaurant and puffing away.

The Jackson family certainly has cause for concern. Family insiders have previously reported that Paris Jackson won’t talk to anyone about why she broke up with Chester Castellaw. Those close to Paris can tell something is terribly wrong, but the aspiring singer and actress is keeping everything bottled up.

This isn’t healthy, especially for Paris. Just two years ago, Jackson ended up in a mental health hospital for nearly a year after experiencing a total meltdown. At the time it was reported that Paris attempted suicide. And if that weren’t enough, Paris hasn’t spoken to birth mother Debbie Rowe in well over a year.

Another cause for concern? The late Michael Jackson’s only daughter will inherit millions when she turns 18 in April. If Paris has access to millions of dollars who knows what could happen. In previous reports insiders claim the first thing Paris intends to do is buy a house and move out of grandma Katherine’s.

Of course, this could just be typical teenage girl behavior – they change hair color as quickly as they change BFFs. Teens rebel – underage drinking, smoking, pushing the limits when it comes to curfew. It’s definitely not uncommon for young adults to refuse to speak about relationships.

Is Paris Jackson headed for another breakdown? Has the break-up with Chester Castellaw caused more emotional damage than the Jackson family realizes? Would the best course of action be to get Paris back into a mental health facility?

Let us know what you think in the comments section below wand come back to CDL for the latest celebrity news.