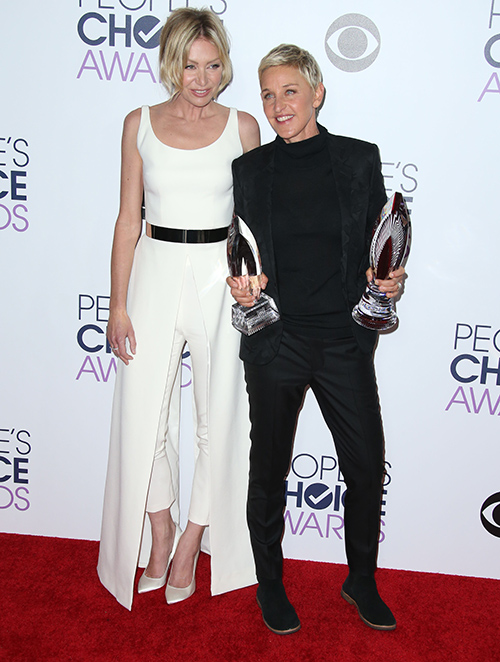 Portia de Rossi got a puppy with her wife, Ellen DeGeneres, instead of the human baby she’s always wanted. Is Ellen avoiding a possible divorce? Is Portia so desperate for a real baby that she is ready to leave Ellen, and this is her attempt at saving the marriage?

Ellen DeGeneres announced on her show that she and Portia de Rossi got a puppy and that they named him Kid. Um, that in no way makes up for not having a real child. The emotions that Portia must be feeling with a little fur ball rather than a baby to love have got to be rough!

But perhaps this move in shifting the attention to an animal over the idea of becoming parents shouldn’t come as all that surprising seeing as how Ellen made it very clear to Matt Lauer in March 2015 during an interview on Ellen’s show that there would not be any kids in the future.

E! reported a bit of what she said, “I love kids. But that’s such a big commitment. And it seems long-term. It seems like a commitment that you have to stick with. And I just don’t know if I can—it’s too risky. Like, what if I don’t like the kid? What if it turns out that it’s not as cute as I wanted or as talented? I’m gonna compare it to all these kids that I have on this show that are so smart and so funny. And I’m like, ‘You are nowhere near these kids I had on today. Sit down and look at this kid I just had on! Do you know all those presidents?’”

I am sure that she made some of those statements in jest. But at the end of the day, she meant it. Ellen DeGeneres refuses to have kids. Will this translate into Portia de Rossi leaving her, going back to men, and starting a family? Don’t forget that before Ellen, Portia was not into women. So who’s to say she won’t go back?

What do you CDL readers think? Was it a cold move to get a puppy when a real baby is what Portia wanted? Or is Ellen just trying to be sweet?

Sounds off all your thoughts in the comments below!