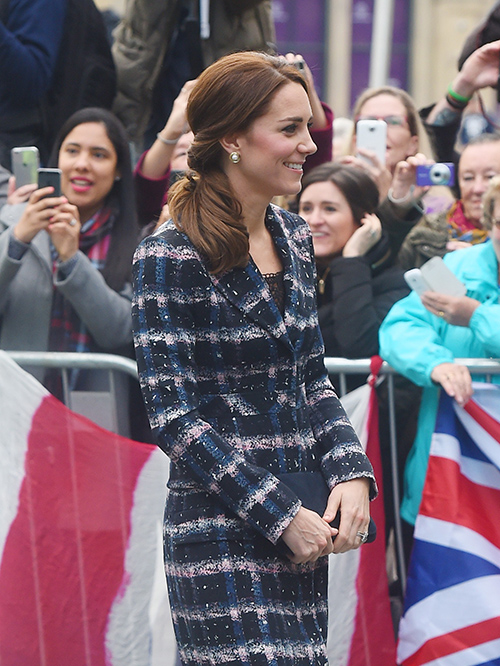 It looks as though Prince William and Kate Middleton don’t even have the time to catch their breaths these days as Queen Elizabeth is demanding that they take on more royal engagements than they can handle. Both the Duke and Duchess of Cambridge looked exhausted and visibly irritated as they were spotted attending the National Football Museum and University of Manchester’s National Graphene Institute in Manchester, England this week.

Prince William and Kate Middleton have been on their feet and working non-stop since Queen Elizabeth literally pulled the plug from underneath them this summer. The Duke and Duchess stayed undercover while taking one luxury vacation after another. Well aware of how their work-allergic attitude is hurting the royal family’s image, Queen Elizabeth has given them such a jam-packed schedule that they barely have any time these days to go back home to their beloved Anmer Hall.

Both William and Kate didn’t look too pleased when they visited both the National Football Museum and the Graphene institute. After all, they haven’t been this overworked in the five years they’ve been married. Clearly, the days of doing only one or two royal engagements are long gone: the Queen is now giving them back-to-back events to make sure they are always visible in the press.

The last thing she needs is more buzz about how Prince William and Kate Middleton are doing nothing more than leeching on the British taxpayer’s pound. So far, Kate herself has been to Canada, the Netherlands, and now Manchester in less than one week and the traveling is definitely taking a toll on her.

In fact, it wouldn’t be surprising if Kate Middleton herself had a breakdown over everything she’s being put through now. Of course, this is the same woman who has used her children, Prince George and Princess Charlotte, as excuses to get out of work, including back on Saint Patrick’s Day when she pulled out of presenting shamrocks to the Irish Guards in London. Surely, that’s the last time Kate will be able to pull such a stunt, as the Queen is obviously given her grandson and his wife an ultimatum: either put in the work, or see your royal privileges stripped away from you.

Take a look at our photo gallery below and tell us if you think Prince William and Kate Middleton are exhausted from all of the whirlwind trips and royal engagements they’ve been put through in the last several weeks? Will the Queen’s work demands end up putting a strain on the Duke and Duchess’ marriage? Let us know! Also, check back with CDL for all the latest news and updates on the royal family right here!

The Duke and Duchess today joined commemorations honouring the six Manchester Victoria Cross recipients during #WW1. The Duke & Duchess were shown the 6 VC commemorative paving stones to honour the #WW1 VCs, after laying a wreath in their memory #VCpavingstones

The Duke chats with families at Francis House Hospice in Manchester, which looks after 370 sick children, teenagers and young adults. 25 years ago the Hospice was opened by Princess Diana.

The Duke was joined by England footballers Jill Scott and Steph Houghton for a penalty shootout with a difference at the National Football Museum in Manchester, featuring virtual goalkeepers! 📷PA