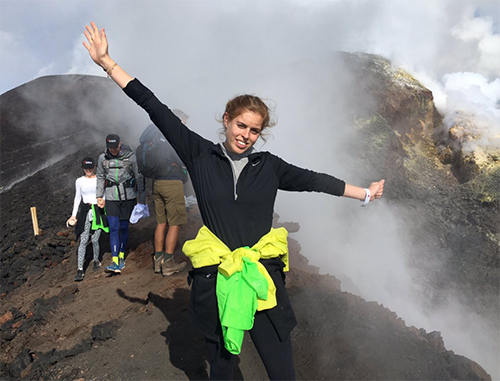 Has a depressed Princess Beatrice taken on more Royal responsibilities and completed a triathlon competition as a way of keeping her mind busy in an effort to hide her heartache following her split from Dave Clark?

A triumphant Beatrice recently shared a photo where she’s proudly standing on Mount Etna following the Strive Challenge. “After swimming 3,300m biking 140km, running a half marathon and hiking up Mount Etna I finally made it.” In the pic, Beatrice looks in great shape. Obviously, Queen Elizabeth’s granddaughter had been working out in order to participate in the Strive Challenge triathlon in support of Big Change.

At least Beatrice isn’t acting as Kate Middleton did during her brief break-up with Prince William. When William dumped Kate in order to pursue Isabella Calthorpe it wasn’t long before Kate was out dancing and partying – and making sure the paparazzi caught it all. Eventually, William gave up his pursuit and returned to Kate’s side.

Is Beatrice still upset that Dave Clark did not propose to the princess in August for her 28th birthday? Royal insiders previously reported that Dave got cold feet and backed out at the last minute leaving Beatrice heartbroken.

Prince Harry and Princess Beatrice seem to be the two young Royals who aren’t able to find love. The Royal cousins seem to be loading up their schedules with Royal engagements in order to keep their minds off romance.

Love is in the air for the rest of the rest of Queen Elizabeth’s grandchildren. Princess Eugenie and boyfriend Jack Brooksbank are expected to announce their engagement any day now. Even Kate Middleton and Prince William seem to have rekindled the romance in their marriage after a summer spent vacationing in a beautiful chateau in France. The Duke and Duchess of Cambridge appeared especially affectionate during their recent Royal Canadian Tour.

Dave Clark and Barbara Bush were seen at the U.S. Open in September. Princess Beatrice was also there with a handsome mystery man. At the time, it appeared that Beatrice might be pulling a Kate Middleton – making Dave jealous in hopes that he would come crawling back and beg her to marry him.

Princess Beatrice may be depressed and heartbroken over the break-up, but the princess is hiding it well. Maybe Dave will come back and resume the couple’s romance after all.

After swimming 3,300m biking 140km, running a half marathon and hiking up mount Etna I finally made it. @strivechallenge @bigchange_ pic.twitter.com/ty2nuci4M4