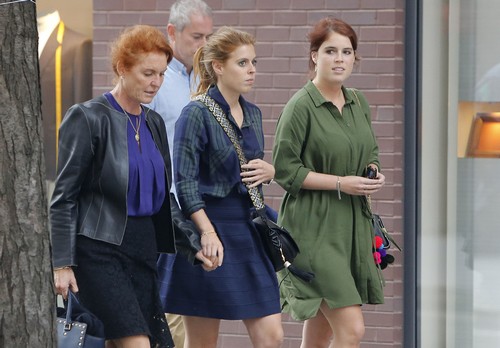 Who was that mystery man with Princess Beatrice at the U.S. Open – a new romance for a young Royal? Seems Princess Beatrice has moved on from Dave Clark, the man who broke the princess’s heart when he didn’t propose on Beatrice’s 28th birthday in August. Dave’s dating again, too. His new lover appears to be Barbara Bush.

It’s been about a month since Princess Beatrice and boyfriend of 10 years announced that they were taking a break. It appears that the break is now a full-fledged break-up.

Both Beatrice and Dave were at the U.S. Open in New York recently. Not together though. Princess Beatrice was with a handsome mystery man who had his arm around her.

Dave Clark was also there with a date. The British businessman seems to have taken a shine to former President George W. Bush’s daughter Barbara Bush. It wasn’t too long ago that Jenna Bush tried to fix Prince Harry up with her twin sister Barbara.

Does this seem familiar, haven’t we seen this before? When Prince William broke it off with Kate Middleton the future King went chasing after Isabella Calthorpe. Kate hit the town and partied it up and made certain that all the escapades hit the news.

Isabella had no desire to hook up with William and spurned his advances. After just seven weeks the second-in-line to the throne sulked off and begged Kate Middleton to take him back.

In photos shared by Daily Mail and via social media, Dave Clark’s date Barbara Bush looks positively miserable and in need of a shower. Dave doesn’t look much better. Perhaps he forgot to shower before heading off to watch the tennis matches.

Princess Beatrice’s mystery man looks quite dashing and well-groomed. While Dave and Barbara didn’t look very interested in each other, perhaps they were intensely watching the tennis match, Beatrice and her new man had a little PDA going on.

The question is, will this be another Kate Middleton and Prince William break-up? Barbara didn’t look all that interested in Dave. Beatrice and her date appeared to be having a jolly good time. Is Dave Clark eventually going to come crawling back to Princess Beatrice and beg the princess to take him back?

We’re not certain who Beatrice’s handsome new boyfriend is at this time, but if he is out and about with Princess Beatrice, we’re bound to find out soon enough. If Beatrice is smart she’ll stick with this dapper gentleman and forget all about Dave. Come back to CDL to keep up with all the Royals news and reports!