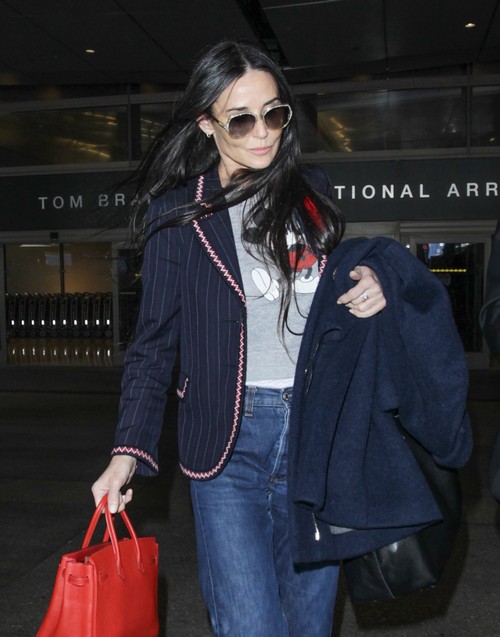 A report says that Prince Andrew and Demi Moore are the hottest new couple in the world but Queen Elizabeth is mortified. The Duke of York is head over heels in love with Demi Moore according to GLOBE – and Andrew has ex-wife Sarah Ferguson to thank for the hot hook-up. This scandalous Royal relationship has taken the heat off Kate Middleton, but not for long.

Once again GLOBE has sources inside the Royal family divulging information about Andrew’s love life. Everyone is absolutely over the moon that Andrew has found love again 20 years after divorcing Sarah. Everyone, that is, except Queen Elizabeth who is reportedly mortified by this budding romance.

Are you wondering how it came to be that Sarah Ferguson played matchmaker for Demi Moore and Prince Andrew? An insider reveals that Sarah and Demi have been best buds for years and years. Demi are such besties that Demi has shared her interest in Kabbalah with Sarah.

The Duke of York isn’t without his baggage needless to say – an underage sex scandal rocked the Royal family to its core. In his younger years Andrew was dubbed “Randy Andy” for a reason – Prince Andrew had girlfriends all over the world.

Now it’s time for Andrew to remarry and Queen Elizabeth has ordered the prince to find a pedigreed bride. Did Andrew run off to his ex-wife to ask for help?

The palace insider divulged that Sarah maneuvered a meeting between Andrew and Demi at the RHS Chelsea Flower Show and “the sparks flew from there” at a private showing at the event.

Kate Middleton would probably be thrilled to have a former A-list Hollywood actress as a member of the Royal family. Everyone knows Kate is obsessed with Hollywood. Maybe Demi could swing a meeting for Kate with Bruce Willis, Ashton Kutcher and Mila Kunis.

Demi Moore is an even worse choice for a Royal bride than Kate Middleton. Demi has been nude in several movies, one of which was even called ‘Striptease.’ At least the Duchess of Cambridge keeps the bum flashing to a minimum and has only been caught once by the paparazzi nude sunbathing.

We’ll just wait to see if this romance is for real, but we highly doubt Demi Moore and Prince Andrew are dating. Andrew prefers girlfriends quite a bit younger than Demi. Royal news is a CDL speciality – come back for more!