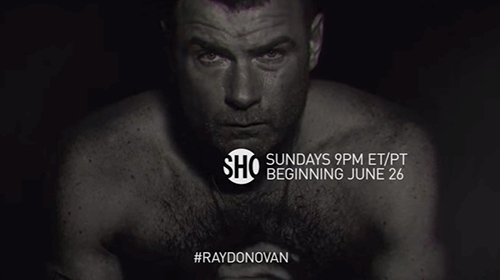 ‘Ray Donovan’ spoilers for Season 4 premiering on Sunday, June 26 reveal that the blowback from last season’s armed conflict with the Armenian mafia will have far reaching effects. The 12-episode season kicks off with Season 4 Episode 1 “I Have Sinned.”

Ray Donovan (Liev Schreiber) wants to be a better man, but it doesn’t look like life is going to let him stay on the straight and narrow. Season 4 video spoilers show human trafficking, a cop stashed in a hotel bathroom, medical issues, mob backlash, and more.

Ray believes that the Armenians will come for him and his family – and what’s a problem right away is that daughter Bridget Donovan (Kerris Dorsey) is not in the fold. She walked away from the family last season but Ray needs her with him so he can keep her safe.

Ray promises that he’s changed and things will be better at home and says he’s going to make things right. It looks like Bridget comes home for a while but may not stick around because she tells her dad that he isn’t able to feel anything and is not even alive inside. Harsh.

Bunchy Donovan (Dash Mihok) and his wife Teresa (Alyssa Diaz) are still together but Terry Donovan (Eddie Marsan) is sicker and twitchier than ever. Mickey Donovan (Jon Voight) is back and suffering ill health but will any of the Donovans care about their evil patriarch’s fate?

Also, we see that Abby Donovan (Paula Malcomson) may have a medical crisis and goes in for an MRI then gets a diagnosis. Abby asks Ray to make her promises that things will be better and he makes the pledge, but we’ve heard from Ray before that things would change.

Despite his promises, some of Ray’s Season 4 misdeeds include barging into a building with guns blazing and driving a police car head on into a wall – with the cop inside – to cover up the kidnapping the officer of the law, possibly by Terry Donovan who misjudges a situation.

Looks like the violence might even hit close to home as Avi (Steven Bauer) and Ray load a body into a bag and haul it out of Ray’s living room. Mickey leaves town for a new start, while Abby begs Ray to tell her what’s going on (as she does at least once per season) and he refuses.

After things get dangerous for his family and Ray has to take extreme measures to protect them, he promises retribution and goes after his enemies. All of this goes down while Ray is simultaneously dealing with a roster of clients who need his fixing talents.

Embeth Davidtz plays Sonia Kovitzky as Season 4 kicks off and is someone who leans heavily on Ray. You may remember her from Mad Men and Californication. Legendary Stacy Keach also guests as Marty Minor, a retired fixer, an older version of Ray who knew Ray back in the day.

Another exciting casting coup is Gabriel Mann who will play Jacob Waller, an attorney that represents big time clients and does not play around. You should remember Mann as the wily hacker Nolan Ross from ABC’s Revenge.

Other guest stars for Season 4 include Lisa Bonet, Ted Levine, Ismael Cordova, Chris Coppola and Tara Buck. The new season looks like it will be amazing as Ray continues to struggle with the man he wants to be vs the man he has to be.

Check back with CDL often for more ‘Ray Donovan’ spoilers and be sure to tune in for a LIVE recap of Season 4 Episode 1 ‘I Have Sinned’ when the season kicks off on Sunday, June 26.