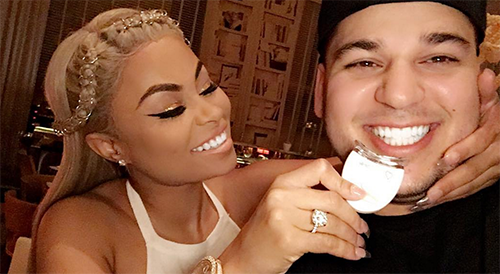 It’s official, Blac Chyna and Rob Kardashian have scored their own reality TV show! Move over, Kardashians, Rob and Blac are about to give his family a run for their money on E! Network. The official announcement was made on June 1 by the network, and it was confirmed that the reality TV show will be following Blac Chyna and Rob Kardashian as they make wedding plans, plus their pregnancy and first child together.

In the press release, Jeff Olde, the E! Vice President of programming, raved about the couple, “Very few love stories have created as much pop culture buzz as Rob and Chyna’s, and we are thrilled to see Rob in such a happy place. We are excited to share the next chapter in their relationship.”

It’s impossible not to root for Blac Chyna and Rob Kardashian. Who doesn’t love an underdog? And, Rob’s comeback has been truly inspiring. Plus, if we are being completely honest, we love the fact that Rob basically balked in his family’s face after Kris Jenner and his sisters treated him so horribly for so many years.

We’re going to assume that Kris Jenner is currently having a meltdown of mega proportions. It’ bad enough Caitlyn Jenner got her own show to make the Kardashians look evil, but now Rob and Chyna are getting their own share of the spotlight as well.

Will you be tuning into Rob and Chyna’s new show? Do you think they will have more viewers than Kris Jenner and his sisters on Keeping Up With The Kardashians? Share your thoughts in the comments below!