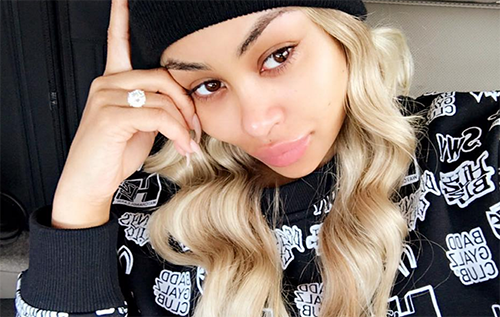 The police were called to Blac Chyna’s house over the weekend after her fiancé Rob Kardashian discovered that they had been robbed! Apparently, someone broke into the safe in Blac Chyna’s house in Tarzana and cleaned out the Keeping Up With The Kardashians star and his future wife – to the tune of over $200,000! Was there a Tyga sex tape in the loot?

According to a report from TMZ, Rob Kardashian called the cops to Chyna’s house after he discovered that someone had emptied out her safe. The website reports, “Law enforcement sources tell us the burglar jacked more than $200k in cash and jewelry from the safe in BC’s Tarzana home. We’re told Rob, who also stays at the house, discovered the crime and called cops over the weekend.”

TMZ’s inside sources say that the Blac Chyna robbery was an “inside job.” There was no sign of forced entry, nor was the safe busted open – someone had the code. Interestingly, this isn’t the first time an “inside job” was done at a member of the Kardashian Family’s home. Remember when Khloe was robbed and she blamed the Keeping Up With The Kardashians camera crew?

It probably is not a coincidence that someone inside Blac Chyna and Rob Kardashian‘s inner circle robbed them … the same week that news hit the internet about a Chyna and Tyga sex tape. Chyna is fuming and threatened to file a lawsuit when she heard that someone was shopping around a sex tape starring her and her baby-daddy. General consensus in the media is that the two incidents are related and whoever broke into Chyna’s safe was looking for the tape – or at least a hard copy. There could be some new Kardashian porn hitting the internet any moment now!

So, who do you think is responsible for the robbery? Was it an inside job? Do you think the thief got Chyna’s sex tape? Share your thoughts in the comments below!