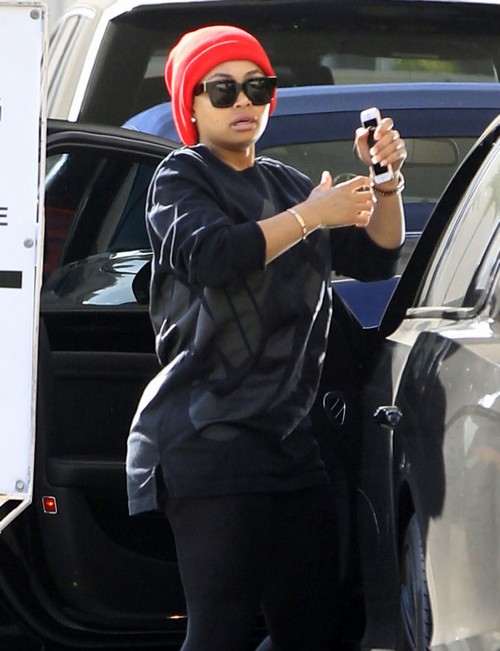 Is Blac Chyna pregnant with Rob Kardashian’s baby? On April 5 Rob and Chyna nearly broke the Internet by revealing that they were engaged to be married – and Chyna has a ginormous ring to prove it, rumored to cost $325,000 – that is worth more than the average American home.

But, after just dating for two months – marriage seems like that last thing that should be on the couple’s minds, unless of course there is a baby on the way.

With all of this engagement ring and wedding talk – we seem to have all forgotten that just last week word on the internet was that Chyna was pregnant with Rob Kardashian’s baby.

Chyna seemed to be putting on a few pounds in the mid-section, rocking a possible baby bump, laying off the booze, and Rob was making some pretty suspicious comments on social media. How could we forget baby bottle emoji-gate?

Generally couples don’t start planning a rushed wedding after dating for just two months, unless they are trying to make sure they bring their unborn baby into a happy family. Shotgun weddings are usually inspired by unplanned pregnancies.

So, while Rob Kardashian’s engagement to Blac Chyna sure is exciting, I think we are all ignoring the bigger picture her. Rob and Chyna all but just confirmed that there is a baby on the way. Seriously, who else gets married after two months of dating if there isn’t a tiny fetus involved?

What do you guys think? Did Rob Kardashian’s whirlwind engagement with Blac Chyna happen purely out of love? Or is he trying to make an honest woman of his pregnant girlfriend?

What better way to make sure your girlfriend doesn’t run off with the only Kardashian heir in her belly, than weighting her down with a massive engagement ring? Share your thoughts in the comments below!

Rob Kardashian is mobbed by photographers while leaving the gym in Beverly Hills, California on April 5, 2016. Rob’s bride to be Blac Chyna recently confirmed their engagement on Instagram writing, “I’m so blessed and honored to have good man in my life, I love you @robkardashian ! #7carats #VVS @benballer.” FameFlynet