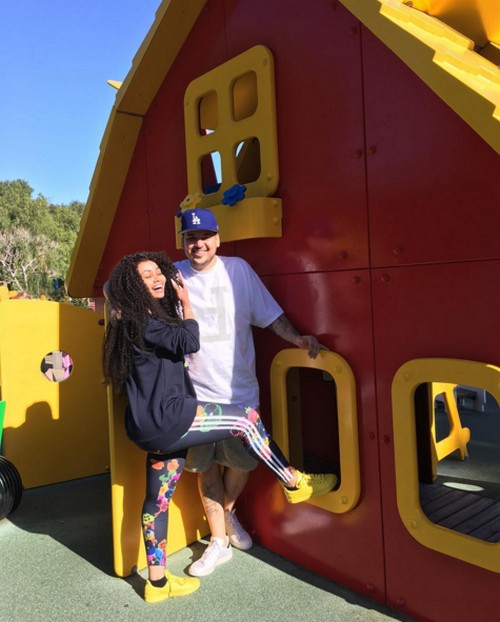 Apart from not inviting Blac Chyna to his birthday party, it seems that Rob Kardashian doesn’t really puts his allegedly pregnant girlfriend as his top priority. Just yesterday, Kris Jenner’s only boy took the time to remind his Instagram fans to follow him on Snapchat – is Rob taking Chyna for granted?

He forgot to apologize to his girlfriend and he was also not by her side as she faces pregnancy rumors.

Rob took to Instagram to showcase himself barfing rainbows with the help of Snapchat’s famous Lens. He captioned his post: “Snapchat name—Robphuckedme—spell it correctly just like I spelled it cuz u all keep adding the wrong person lol.”

Rob’s post comes amid a Radar Online report claiming that his girlfriend Blac Chyna shed some tears after he ditched her for his family’s presence on his 29th birthday last Thursday. Tyga’s baby mama even showed the world how she felt by sharing a clip on Snapchat showing her face as she shed cartoon tears.

Obviously Blac Chyna couldn’t do anything to make last-minute arrangements and be with her man at his Kardashian birthday party. After all, it was Kris Jenner who arranged the Nobu dinner with Rob and the entire “KUTWK” family and she hates Blac Chyna. And fortunately for Chyna, she got over it quickly by going out with girl pal Paige Da Brat.

However, Blac Chyna reportedly did not really intend to go to Rob’s birthday party anyway, and this is what Kim Kardashian’s brother likes about her—she does not feel the need to befriend his family – good thing! Plus, it would really be awkward to be around with her ex-boyfriend Tyga and his current girlfriend, Kylie Jenner.

If there’s another thing Blac Chyna should be focusing on right now, it would be the claims that she’s already carrying Rob’s baby. Since the romantic relationship between the two went public, many took notice of the seemingly growing baby bump of the former exotic performer.

Last Tuesday, she took the time to prove the speculations wrong by flaunting her flat belly on Instagram. She also shared a snap showing her wearing a waist trainer to slam the pregnancy rumors.

In spite of addressing the rumors, Blac Chyna is still being followed by scandals and issues. The latest of which is the one involving Rob’s fans who think the elusive “KUWTK” star is too good for Blac Chyna. Thankfully, Khloe Kardashian’s brother has come to his girlfriend’s defense by stating on Instagram: “Nobody is too good looking for anybody or too good for anybody.”

Rob Kardashian even went as far as responding to a rude commenter, saying: “What you see is not necessarily what I see—evidently. And she is beautiful and full of life.” Good job on defending your girl Rob! Just please don’t ditch her next time around if you’re really serious with her.

Do you think Rob is taking Blac Chyna for granted? Or, does he show enough affection toward his girlfriend? Sound off below and follow CDL for more of the latest Hollywood scoops and gossip!