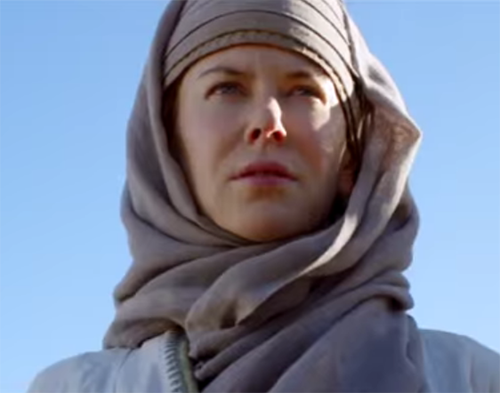 Robert Pattinson and FKA Twigs still have not set a wedding date – and the odds of them getting married seem less and less likely. Twigs has played games with her fiancé, Twilight hunk Robert, for months now. She has been stalling on wedding plans, pursuing her “career,” and toying with the idea of an open relationship. Robert Pattinson needs an older woman in his life, one who doesn’t play childish games. Could Nicole Kidman be the one?

Robert Pattinson and Nicole Kidman have been working hard on their new movie “Queen Of The Desert.” The film follows the story of an author and archaeologist named Gertrude Bell (Kidman) and Lawrence of Arabia (Pattinson). A new clip of the 1900 biographical film has hit the internet, and it features a scene between Kidman and Pattinson, the duo’s chemistry is impressive, and Kidman even plants a kiss on Robert.

The clip of Nicole and Robert kissing has tongues wagging on the internet – and no doubt has raised a red flag for his jealous fiancé FKA Twigs. Nicole Kidman is a married woman, but the fact that her marriage to Keith Urban has been on the rocks for years now doesn’t exactly reassure anyone that there could be something going on between her and the Twilight hunk. There’s nothing like two actors, on the verge of a break-up, kissing each other in the desert for a new movie that doesn’t raise red flags for all parties involved.

FKA Twigs doesn’t seem to want to be tied down, but she doesn’t want anyone else to tie down Robert either. Meanwhile, Keith Urban is devoting all of his time to the final season of American Idol, and neglecting his very needy wife Nicole.

Could this be a recipe for disaster? Do you think Twigs and Keith should be concerned about all of the time Nicole and Robert were spending together in the desert? Let us know what you think in the comments below!