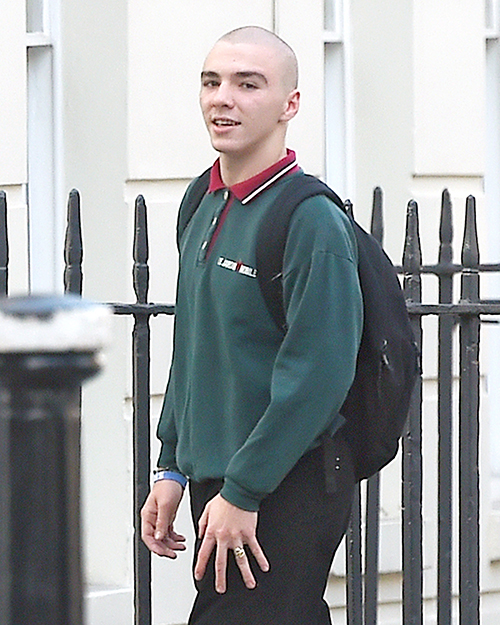 Rocco Ritchie has been spotted for the first time in London after his parents, Madonna and Guy Ritchie, managed to settle their 9-month custody battle. The 16 year old looked defiant as he strolled through London by himself amid news that his mother Madonna no longer has control over him.

Madonna and Rocco Ritchie’s fallout began last December when the teenager refused to fly home to New York City to spend the Christmas holiday with his mother and family. Instead, he spent almost three months living in London with his father Guy Ritchie and stepmother Jacqui Ainsley. He was busy kipping school and, at one point, was caught smoking and drinking under a bridge. This infuriated Madonna, who has long raised her kids under strict rules and expectations. Yet, Rocco Ritchie proved to be just like his famous mother when it came to his defiance and rebellion.

Madonna and Guy Ritchie finally came to an agreement over Rocco Ritchie’s custody battle hours before they were both due in court. According to The Sun, the former couple have managed to keep things civil between them as they’ve agreed for their son Rocco Ritchie to live with his father and be educated in London with Madonna paying frequent visits. Plus, it’s long been rumored that Rocco Ritchie had had enough of Madonna’s embarrassing social media photos of him and his siblings, her grueling tour schedule and, of course, her micro-managing every detail of his life – from what he can eat to what he can watch on television. By staying in London, Rocco Ritchie sent his mother a clear message that she’s definitely met his match in him.

No one knows the exact details of Madonna and Guy Ritchie’s custody agreement, but one thing is for certain: the Material Mom managed to loosen her firm grip on her teenage son. As controlling as Madonna is with every aspect of her life, there’s a good chance that she realized she can’t win with someone who is just like her, or in this case, her son Rocco Ritchie.

No matter how hard she’ll make him stay with her, he’ll just pull further back until Madonna loses her son altogether. At least with this agreement Madonna still has Rocco Ritchie in her life, no matter how painful it is to see live with his father rather than her. With Rocco Ritchie being the rebellious, rule-breaking teen that he is, just like his mother was during her teen years, the apple sure didn’t fall far from the apple tree.

Take a look at our photo gallery below of Rocco Ritchie and let us know what you think.