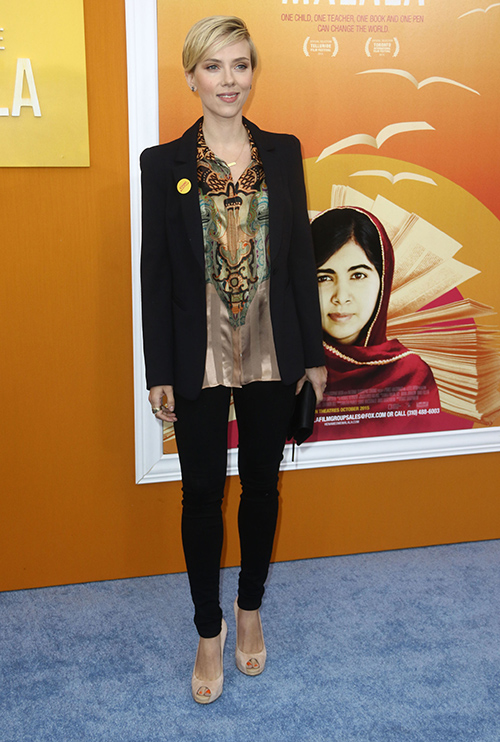 Scarlett Johansson is happily married to French journalist Romain Dauriac, but that’s not discouraging her new admirer Rupert Sanders from trying to make a move on her. Rupert and Scarlett are working together on a new film titled “Ghost In The Shell” – and Sanders has taken a liking to Scarlett, according to this week’s edition of OK! Magazine.

Rupert Sanders is well-known for his movie credentials, but when most people hear his name, they don’t think of the blockbuster films that he has produced. They usually say, “Isn’t that the guy who broke up Kristen Stewart and Robert Pattinson?” Rupert already broke up the Twilight Royal couple – and simultaneously his own home as well, because he was married when he and K-Stew were having an affair.

If Rupert Sanders was able to steal Kristen Stewart away from Robert Pattinson, does that mean that Romain Dauriac should be worried about his wife Scarlett working so closely with the producing Casanova? OK! Magazine’s inside sources seem to imply that Rupert’s infatuation with Scarlett is pretty one-sided. The insider dished, “Scarlett always gives directors her undivided attention, Rupert might be getting the wrong idea.”

Scarlett Johansson doesn’t really strike us as the cheating type; however, there have been reports that she and Romain’s long distance relationship and disagreement over which country they should live in has really affected their marriage. So, if ever there was a time that Scarlett would be unfaithful to her hubby, now would probably be it – while there is trouble in paradise.

What do you guys think? Can you picture Scarlett Johansson cheating on her husband with Rupert Sanders? And what is up with Rupert – can’t he find a girl that isn’t married or one half of a celeb super-couple?! Share your thoughts and theories in the comments below!