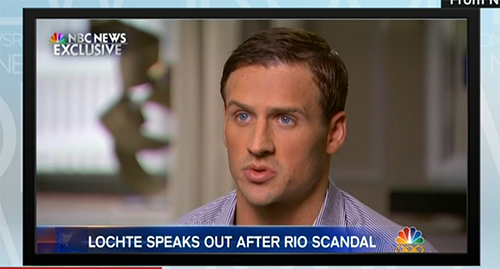 Ryan Lochte, one of the greatest swimmers around, has lost his Speedo sponsorship after his Rio shenanigans blew up in his face. I’m not sure exactly how he’s feeling at the moment, but I bet he’s not running around yelling “Jeah!” Lochte and his band of losers (erm, I mean, Olympians) claimed that they had been robbed at gunpoint one night after a party.

Well, as information came to light, it was determined that Lochte and his crew were the ones causing all the raucous. The U.S. swimmers reportedly vandalized a gas station and, soon after, urinated on the building.

It’s not super shocking that Speedo, one of the biggest brands in swimming, was one of the first to drop the swimmer. Unfortunately, for Lochte, Speedo probably won’t be the first to nix their endorsements with swimming’s biggest bro.

Speedo issued a statement soon after calling it quits with him: “While we have enjoyed a winning relationship with Ryan for over a decade and he has been an important member of the Speedo team, we cannot condone behavior that is counter to the values this brand has long stood for. We appreciate his many achievements and hope he moves forward and learns from this experience.”

Ralph Lauren, who also had a contractual relationship with Lochte prior to entering the games, won’t be returning for the JEAH! party either. They said, “Ralph Lauren continues to proudly sponsor the U.S. Olympic and Paralympic Team and the values that its athletes embody.”

The company continues, “Ralph Lauren’s endorsement agreement with Ryan Lochte was specifically in support of the Rio 2016 Olympic Games and the company will not be renewing his contract.”

What do you make of Ryan Lochte’s immature behavior? Do you think he should be cut from all/most of his endorsement deals, or do you think all these companies are overreacting?