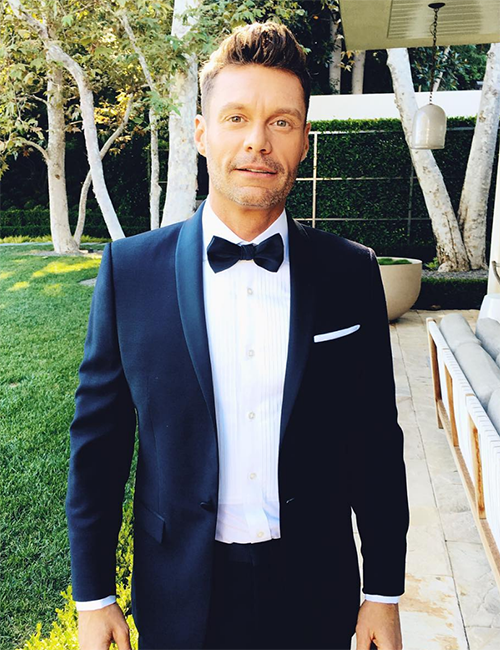 Noted media personality and jack-of-all-trades Ryan Seacrest is reportedly involved in a steamy romance with none other than Brazilian bombshell and Victoria’s Secret model Adriana Lima! Life & Style magazine reports that the two have been hot and heavy ever since meeting at the recent Rio Olympics. Reports of a hookup began when Adriana Lima posted photos to her Instagram account of herself, Ryan Seacrest, and fellow Victoria’s Secret model Alessandra Ambrosia having lunch together in Rio during the Olympics.

The model described Ryan Seacrest as both handsome and charismatic, causing her followers to wonder whether there was more going on behind the scenes than just an innocent lunch between friends. Since then, the two were spotted sharing a meal and looking very cozy together in New York City. Will this Brazilian beauty be the one to finally get media mogul Ryan Seacrest to take that fateful walk down the aisle?

The news of her hookup with Ryan Seacrest comes just six short months after Adriana Lima divorced from husband of five years and father of her two children, Serbian NBA-star Marko Jaric. Seacrest, on the other hand, has never been married or had children, but has been linked to numerous women over the years, including Dancing with the Stars’ Julianne Hough and model Shayna Terese Taylor.

Having completed a gig as food and cultural correspondents for the Rio Olympics along with Alessandra Ambrosia, Adriana Lima may be using her new relationship to launch her own media career, once she hangs up her wings and her modeling days are over. Seacrest, who has hosted American Idol and E! News as well as having a successful radio show and serving as executive producer to such hit shows as Keeping Up with the Kardashians, is definitely the man in Hollywood to seek out when one wants to get into the TV and cross-media game. The Brazilian model would definitely shine as a special correspondent for events such as Fashion Week.

What do you think of the news that Ryan Seacrest and Adriana Lima are officially a couple? Could she be using him to launch her own TV career, or is this true love at last for Seacrest? Tell us your thoughts and theories in the comments below!

Image credits to Ryan Seacrest and Adriana Lima // via Instagram