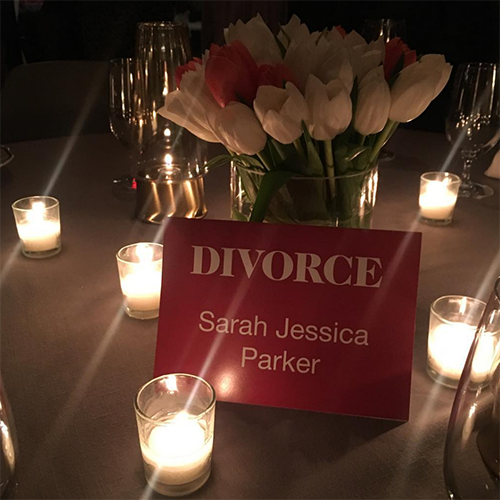 Sarah Jessica Parker is promoting a new show about marriages and divorce, but she’s refusing to talk about her own. The actress, who has one of the longest marriages in Hollywood with her husband Matthew Broderick, has made it clear that she doesn’t want the press asking her about her own personal life while promoting her latest HBO project, ‘Divorce.’

According to Naughty Gossip, the former ‘Sex and the City’ star let it be known that she has no problem giving the public her own insights when it comes to the topic of marriage, but she won’t be discussing her own anytime soon. Of course, that had led to the speculation that Sarah Jessica Parker and Matthew Broderick’s marriage might not be as perfect as the couple would like everyone to believe. In fact, there’s a good chance that they might be going through their own marital troubles, as it’s been months since they’ve been seen actually happy and at ease with one another.

Even though Matthew made the effort to support his wife while she was promoting ‘Divorce,’ many critics couldn’t help but notice that the couple looked distant and uncomfortable on the red carpet with one another. Sure, Sarah Jessica can talk about still being in ‘wedded bliss’ all that she wants, but her body language with her husband tells a whole different story. Matthew looked tense while Sarah Jessica unnaturally laid her hand on his stomach while posing for photographers.

In fact, earlier this summer, it was rumored that Sarah Jessica and Matthew were going through their own ‘conscious uncoupling’ period while trying to fix the issues in their rather shaky relationship. They’ve even bought two adjoining New York City townhomes in hopes that their new arrangement of living together but apart would help save their marriage.

And while living as neighbors might be working for now, Sarah Jessica Parker and Matthew Broderick won’t be able to hide their ‘happily married’ charade for long. Sarah Jessica refusing to talk about her own marriage while promoting a show about the ups and downs of married life only further indicates that she’s hiding something big that will eventually make its way to the headlines sooner rather than later. Otherwise, why promote a show about a topic that she has so much personal insight on, but refuses to share? Clearly, Sarah Jessica Parker is worried that her on-screen divorce might lead to her off-screen divorce, too. Do you agree, CDL readers?

Well folks, I’ve teased you long enough. It’s time for the big reveal. Introducing: the SJP LBD. A new collection of Little Black Dresses designed by me, all made proudly in the USA. Our first silhouette (a surprise!) will launch this October exclusively at @bloomingdales, with more designs to follow soon thereafter.  Including this one, which I’ve been practically living in. Follow us on @sjpcollection so you don’t miss a beat. The wheels (and doors) never stop spinning… X, SJ

Well folks, the rumors are true. STASH by @SJPBeauty. Officially launching in the UK on the 14th of September. Enter now to be among the first to purchase STASH in London, plus receive an exclusive personalized gift. Oh, and I’ll be there too!!! And I’d so love to meet you. Head to @SJPBeauty now for all the entry details. I guess I should start packing. X, Sj