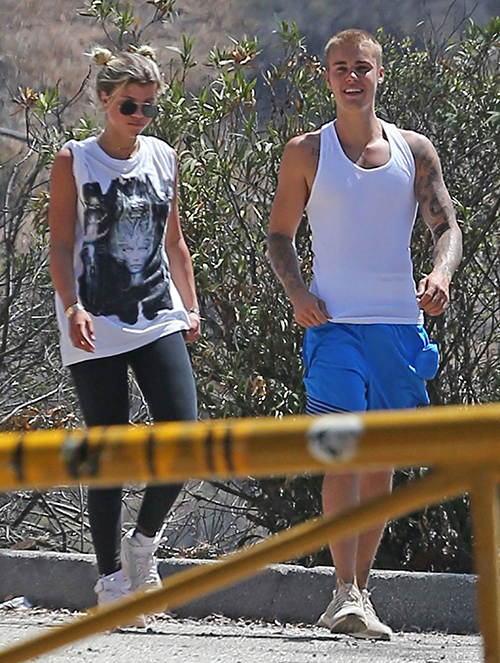 Justin Bieber is once again proving that he loves to play hard to get. Even though there was speculation earlier this summer that Justin Bieber and Selena Gomez’s romance was heating up again, the ‘Cold Water’ hit maker has surprised fans once again by stepping out with a new girlfriend.

According to Britain’s Mirror, Justin Bieber and Sofia Richie are the celebrity world’s hottest new couple. Sofia Richie is not only the daughter of Lionel Richie, but also an aspiring model who is hoping to break into the entertainment business, just like her older sister, Nicole Richie. And of course, if there’s one person who is going to help her achieve that, it would be Justin Bieber.

Justin Bieber and Sofia Richie have been spotted on multiple occasions now, taking hikes together in Los Angeles and even holding hands in Laguna Beach. What’s more, Sofia Richie has even been photographed wearing Justin Bieber’s pajamas, signaling that the couple is definitely getting hot and heavy together.

This of course is disappointing news for Selena Gomez fans, who were hoping for an official ‘Jelena’ reunion by the end of the summer. In fact, it was Selena Gomez herself who hinted that she and Justin Bieber might be hooking up again, as they have allegedly collaborated on a new project together. And while there’s no doubt that Selena Gomez was looking forward to being with her one and only love again, Justin Bieber is definitely playing hard to get.

Considering Sofia Richie is just 17 years old, there’s a good chance that Justin Bieber is treating her like nothing more than one of his short-term love conquests, which have included the likes of former flames Hailey Baldwin and Australian model Sahara Ray. Selena Gomez knows that it will only be a matter of time before he gets bored and ends up crawling back to the singer, who just happens to be his last official girlfriend. But then again, knowing how Justin Bieber operates, it’s doubtful that he will ever fess up or come clean about his true feelings for her.