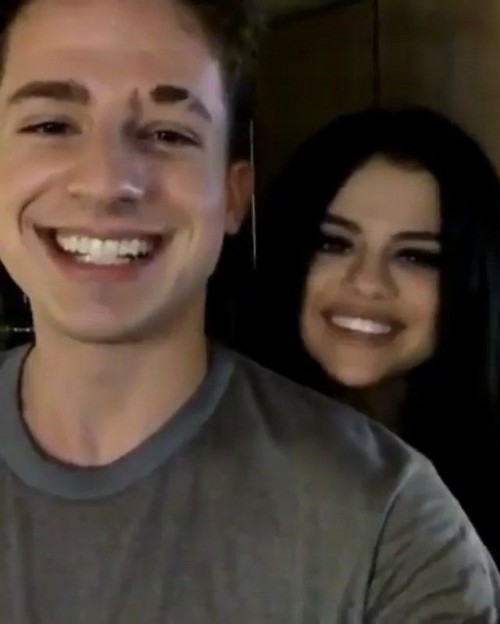 Selena Gomez is dating Charlie Puth and hooking up according to a new report. If that’s the case do we think that Justin Bieber must be jealous. Maybe that’s why Justin has been posting old pics with Selena on social media lately?

What started as friendship between Selena Gomez and Charlie Puth appears to be turning toward a dating romance. And being on tour together may heat things up even more. The Selena and Charlie will hit the road in May when Charlie joins Selena for her Revival Tour.

A MTV Video Music Awards party in August 2015 brought Charlie and Selena together. As previously reported Charlie and Selena started chatting and he was super impressed by Selena’s maturity level. Charlie revealed that Selena just gets him and that’s why the friendship blossomed.

Selena sent the world into a tizzy recently when she liked a photo Justin posted on Instagram from way back when. The pic posted by Justin on March 19 was from 2011 – and it shows the couple kissing. Was this because Justin found out Selena was getting closer and closer to Charlie and this is the Biebs way of trying to woo SelGo back?

Another round of speculation over a Justin Bieber and Selena Gomez reunion started when Justin liked a photo of bikini-clad Selena sitting at the piano. A source told Us Weekly that Justin wants Selena back “but she won’t go for it.”

Charlie Puth has previously stated that Selena is interesting and that he’s happy they became friends. Selena recorded a duet with Charlie, We Don’t Talk Anymore, for his debut album Nine Track Mind. We’d say that’s a pretty great friend.

Things between Charlie and Selena aren’t serious yet an insider divulged. The friend who spoke to Us Weekly says Selena is “super into [Charlie]” but describes the relationship as just a “flirty friendship” right now.

Being on the road together could turn that flirty friendship into a passionate romance for Selena Gomez and Charlie Puth, after all Selena hasn’t exactly been hesitant to jump into relationships since being dumped by Justin Bieber years ago. Grow up Selena – and stop running back to Justin Bieber whenever you have a new album release or a concert tour.