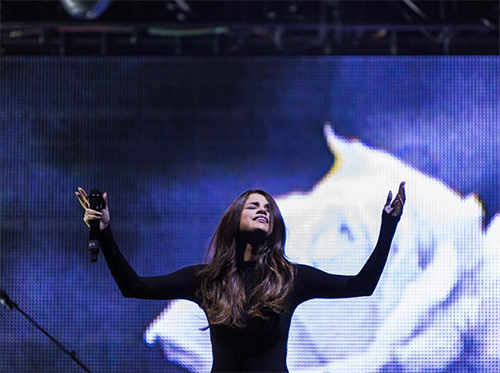 Is Selena Gomez really getting back together with Justin Bieber, or just using him to promote her 2016 tour – which kicks off in a month? Selena Gomez and Justin Biebers’ fans went into a frenzy when he posted a throwback photo on Instagram of the former couple, and then a few days later Selena surprised him at his ‘Purpose’ tour. Mind you, this all came about less than a month after SelGo insisted in an interview that she was “done” with Biebs.

Selena Gomez may be a lot of things, but you can’t deny the girl’s head for business. She knows how to work the media, and how to promote her music. Whenever Selena has a new song dropping, or an album debut, she suddenly leads fans into believing that she and Justin Bieber are getting back together.

‘Jelena’ fans are skeptical that Selena would play games with Biebs’ heart, and use him just to promote her music. But ask yourselves these two questions. When was the last time Selena Gomez participated in an interview and did NOT mention Justin Bieber? Or, the last umpteen times Selena teased or hinted she and Biebs were getting back together, did it actually happen?

Selena Gomez’s Summer 2016 tour kicks off on May 6 in Las Vegas, Nevada. And it can’t be a coincidence that just as she started to promote her new tour, she and Justin’s possible reunion flooded the media once again. Sure, Selena didn’t tell Justin to post a photo of them on Instagram, but her sudden change of heart towards him as she starts promoting her new tour could have definitely inspired Biebs to do that.

And, we’re pretty sure she showed up to his “Purpose” Tour on her own accord, because a few of Justin’s other hook-ups and rumored girlfriends were in the audience as well. If Justin knew Selena was coming, we’re pretty sure his other girls wouldn’t have been invited.

What do you guys think? Is Selena really interested in dating Justin Bieber again? Or is she just using their relationship to promote her upcoming tour? Let us know what you think in the comments below!