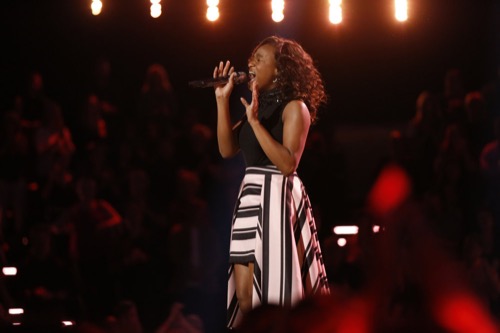 Shalyah Fearing of Team Adam chose to perform live “My Kind of Love” by Emeli Sande this week for her Top 10 song performance.  Did you watch tonight’s show? In case you missed tonight’s show, CDL has you covered – read our full and detailed recap right here! And if you missed any of the videos – check those out right here.

On tonight’s show, the Top Ten artists performed live for coaches Christina Aguilera, Adam Levine, Blake Shelton and Pharrell Williams for America’s votes and a chance to move to the next round. This season the competition is fierce and each of the Top 10 must sing their heart out and deliver the performances of a lifetime to win Season 10 of The Voice.

On tonight’s Top 10 episode, Shalyah sang “My Kind of Love” by Emeli Sande as his live performance and this is the judges’ comments about his performance:

“Blake says she almost blew his hair piece off and says he loves her going back to that type of performance and says when she’s edgy and ragged and wild, it’s where she thrives and she bought herself more time. Pharrell says it’s so cool to witness her passion.

He says she’s on fire on the inside and shares it with them. He says her spirit is present in the now. Coach Adam says it was an excellent job and says she’s a favorite because she has the ability to do well. He says vote her through because he has a Mary J Blige picked out for next week.”

Check out the full video below – and share your comments on Shalyah Fearing’s Top 10 performance. Do you think Shalyah can win it all? If you missed any of the Top 10 performances – you can see them all right HERE! Share your thoughts in the comments below on tonight’s finale performances for The Voice Season 10 Top 10.